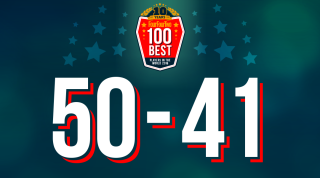 Hummels was the latest player to follow the well-trodden path from Borussia Dortmund to Bayern Munich in the summer, joining Mario Götze and Robert Lewandowski in swapping black and yellow for red and white.

Dortmund supporters were understandably irked at losing yet another of their star men to Big Bad Bayern, but Hummels could hardly be begrudged a move to one of Europe’s elite outfits. After all, the 27-year-old has bounced back from a below-par 2015 and demonstrated exactly why he’s one of the world’s leading centre-halves this year.

“For me, Mats Hummels remains the best defender in Germany because he's the most complete,” Dortmund CEO Hans-Joachim Watzke told Sport1 in August. “I see him ahead of Jerome Boateng, but it's an open race.”

One thing’s for sure: that’s a rather mean centre-back pairing Bayern have to call upon. – GL

At the age of just 24, Koke has already made more than 200 appearances for Atletico Madrid’s first team and B side, and his importance to Diego Simeone’s machine shouldn't be understated. As Atleti undergo their own evolution, the Spaniard has been afforded the chance to become less peripheral on the international scene too.

Though Koke has been involved with la Roja since 2013, the quality of Spain’s midfield options has made things tough. Under new boss Julen Lopetegui, however, the Atleti midfielder has been first choice throughout this year’s World Cup qualifiers and appears set to make the long-awaited transition to becoming national stalwart under the ex-Porto boss.

Koke chipped in with 14 assists in the league last season but fell short at the final hurdle in Europe. That setback will force the Atletico man to once again show his competitive temperament and kick on under the watchful eye of Diego Simeone in 2016/17. – SH

How France fans must have wished Guerreiro had chosen the country of his birth rather than that of his father’s as they watched the tenacious and skilful left-back nullify Paul Pogba, smash a free-kick against the bar and generally put in a display full of verve and class in the European Championship final.

As well as his energetic and technically proficient play, Guerreiro’s tactical understanding means he is equally effective in several positions, with his intelligence on the pitch mirrored by the way he's managed his career. Improving year on year in France for Lorient, he patiently waited for the right opportunity before joining Borussia Dortmund ahead of PSG and Barcelona this summer.

He's settled immediately in Germany, playing as a left-back, a left winger and even in central midfield. “Guerreiro is too good to be restricted to just one position,” says his coach Thomas Tuchel. – TK

As last season began, the biggest question mark surrounding Juventus was how Dybala would handle his €32 million move from Palermo to Turin. A star in Sicily, the young Argentine answered every doubt emphatically and ensured the Bianconeri didn't miss the departing Carlos Tevez one bit, with his tally of 23 goals and nine assists coming almost exclusively via his magical left boot.

He danced past opponents in the Champions League too, netting in the 2-2 draw with Bayern Munich before missing the return leg with an injury that only served to highlight his importance to the team, who crashed out without their talismanic star.

"Dybala is unique," Carlo Ancelotti told Tuttosport recently. “He's truly a modern forward, combining his runs and dynamism with his talent. He could make history with Juve for the next 10 years.” Who are we to argue? – AD

Next: The brilliant nutter

Once seen as the heir to the throne of Xavi and Iniesta at Barcelona, Thiago, now 25, is these days very much his own man – even if he’s not quite lived up to that initial billing just yet. A series of injuries have been responsible for much of that, though the nagging suspicion remains that Thiago’s best comes in flashes rather than the unwavering consistency of his La Masia predecessors.

That said, a largely injury-free Thiago has become a staple of the Bayern Munich side under Carlo Ancelotti, and his new manager’s less dogmatic approach to possession has given the midfielder more of a license to take risks in attack.

It’s also, however, been mooted that his long-term future may in fact lie in the holding role. Thiago’s natural tenacity, metronomic distribution and expert reading of the game stand him in good stead to excel there, and Xabi Alonso’s advancing years could make for a neat baton-passing routine – for country as well as club. – AH

His tendency to over-embellish matters when on the receiving end, juxtaposed with the occasional violent tendency of his own, has earned Pepe the reputation of a pantomime villain – but you don’t get to be Real Madrid’s first-choice centre-back for a decade without being a mighty fine player.

The Brazil-born defender owes his immense strength and prowess in the air to his father, who made him train by strapping weights to his legs and heading the ball into the sea. As well as brute strength, Pepe’s deceptive speed makes him a formidable barrier for any opponent threatening his goal.

The full range of his defensive attributes were on display at Euro 2016, where monstrous performances against Croatia and France in Portugal’s two toughest games earned him a place in the team of the tournament. It capped a magical couple of months for the centre-half, who collected his second Champions League winner's medal at the start of the summer. – TK

If the ability to shift supporters to the edge of their seats was a decisive factor in determining the order of this list, Douglas Costa would be a contender for the No.1 spot. The thrill-a-minute winger has continued to dazzle for Bayern Munich and Brazil in 2016, combining searing speed with tight close control and an eye for an assist – the 26-year-old laid on 12 goals for his team-mates in the Bundesliga and Champions League last season, while also netting six himself.

He’s hitherto been less productive in an injury-disrupted 2016/17, scoring two goals and recording one assist in 11 appearances in all competitions. Given that new manager Carlo Ancelotti is looking to add the counter-attack to Bayern’s possession-dominated armoury, though, the jet-fuelled Costa is likely to become even more essential to the German champions in the coming months. – GL

Next: Three strikers at different stages

No player in European football splits opinion more than Cavani. The PSG striker finished last term with 19 league goals in 32 games – while playing second fiddle to Zlatan Ibrahimovic – and is scoring at a rate of one per match this season... but that hasn't been enough to exempt him from criticism.

Goalless through the Copa America Centenario this summer, Cavani’s poor form was a factor in Uruguay being eliminated in the group stage. He’s since responded by scoring eight times in nine games in the World Cup qualifiers, but his finishing has let him down for his club – most notably in two Champions League clashes with Arsenal.

If PSG are to reach the semi-finals of Europe's premier competition this season, they'll need greater consistency from their No.9 in front of goal. – AG

Controversial is the word that best sums up Benzema’s 2016. The sex-tape blackmail scandal involving Mathieu Valbuena saw the striker excluded from France's squad for Euro 2016, and he's not yet been recalled by Didier Deschamps for the World Cup qualifying campaign.

Still, Benzema remains one of the world's best strikers and continues to impress for Real Madrid, particularly in his ability to help get the best out of Cristiano Ronaldo and Gareth Bale. When his head begins to stray, so do his performances, but when he's focused there aren't many better. – DC

It’s difficult to know what to make of the Brazil-born Spaniard’s last 12 months. For much of 2015/16, Costa spent more time engaging with opposition centre-backs than he did with the back of the net. Few were the Match of the Days without Alan Shearer questioning how good the Chelsea forward could be without such aggression. Yes, that Alan Shearer.

Yet Costa scored only five fewer goals in all competitions in 2015/16 than he did in his first season in English football. That 12 of his 16 efforts came under interim boss Guus Hiddink implies extenuating circumstances as the wheels fell off Jose Mourinho’s second coming at Stamford Bridge.

Since significant flirtations with former club Atletico Madrid in the summer, Costa has refocused. He looks leaner, and though it would be difficult for him to be meaner, the 28-year-old’s 10 goals in his first 13 league games this season serve notice of a soufflé of crowbars loving life under Antonio Conte, himself far from a shrinking violet as a player. – AM