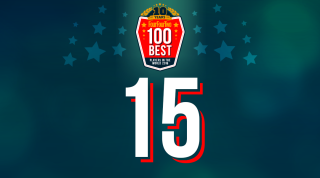 It says much about modern football that Juventus paid £75 million for a striker turning 29 in the knowledge they’d probably get two good years out of him. It says much about Gonzalo Higuain that they probably made the right call.

There’s a reason Higuain has risen 48 places in the FFT100. In 2015/16 he broke Serie A’s post-war Capocannoniere record (and equalled the all-time record) by scoring 36 league goals for runners-up Napoli. That’s 36, with his nearest rival netting 19. Indeed, since 1959 only one person, Luca Toni, had even reached 30 in a season, and Italian football has seen some pretty decent forwards in the past six decades. Higuain topped the lot.

On April 3, it looked hopeless. Napoli’s trip to Udinese appeared simple enough – their opponents were embroiled in a relegation battle and had scored three fewer goals in the season than Higuain on his own – but with the Partenopei trailing 3-1 despite the Argentine’s rocket from 20 yards, two pointless bookings for off-the-ball incidents condemned Higuain to a three-match ban. Six goals required from seven games became six from four. Then, when Napoli lost 1-0 to Roma upon his return, six from three.

Higuain went into the final 45 minutes of the season, in the driving rain against Frosinone, still needing a second-half hat-trick. A neat first-time volley, and he grabbed the ball from the net. An even neater first-time volley 10 minutes later, and Napoli celebrated the post-war record being matched. And 10 minutes after that, a third volley – nay, an overhead kick from 20 yards, the ball looping over the goalkeeper as if illustrated in a children’s book – and the record was his.

After that ridiculous finale, Higuain’s summer brought drama of a different sort. Argentina breezed into the Copa America Centenario final, with Higuain scoring twice in the quarter-final and twice more in the semi, but for the second year running they lost to Chile on penalties.

A month later, Juventus threw down history’s third-biggest transfer fee for their title rivals’ star. Unlike Diego Maradona before him, Higuain would not be the Argentine driving force behind a Napoli Scudetto. It’s no surprise that receiving a £75m sum hasn’t placated the angry Napoli fans who feel betrayed. It’s no surprise, either, that with Higuain in Turin, Juventus are already four points clear in 2016/17’s Serie A, while Napoli are seventh.

Higuain hasn’t been as explosive as he was last season – that would be impossible – but he has adapted to challenges at Juve moderately well. He’s no longer indispensable, despite that transfer fee; Massimiliano Allegri wasn’t afraid to drop Higuain in favour of Mario Mandzukic for “a physical game” against Inter, having apparently been binge-watching The Crystal Maze. Meanwhile, a thigh injury has meant training alone, and Napoli supporters’ fury has reportedly necessitated a 24-hour security escort. Even so, Higuain’s finding the net with some regularity.

Of course he’ll never match 2015/16. Higuain was simply relentless: he scored five braces in seven matches either side of Christmas, and his longest goal drought of the season lasted 200 minutes in February. This wasn’t flat-track bullying, either: that final-day treble was his only hat-trick all season – some feat for 36 goals across 35 matches – and he did not discriminate, scoring against 17 of the league’s 19 other teams.

A Scudetto with Juventus this season looks guaranteed. The real ask: ending their 20-year wait for a Champions League title. Challenge accepted.