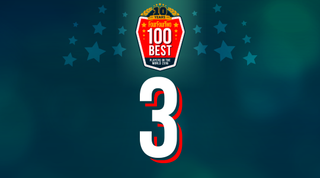 The weak link in MSN they once said. How absurd that take now looks. Luis Suarez has if anything, grown to be possibly the most productive member of the greatest attacking trio ever seen in the game.

There's also the fact he’s become the best striker in the world, with his goalscoring reaching a phenomenal level. Suarez proceeded to register 40 goals in LaLiga last season, and won the much lauded Pichichi Trophy winner awarded the top scorer in the league. The monopoly of the award being passed between Cristiano Ronaldo and Lionel Messi was over. Not content with that, he landed the European Golden Shoe award too, and like with the Pichichi, became the first player to win the award other than the duo.

An incredible 15 of his goals were scored in the final five games, and Suarez also managed to tie with Messi for the most assists in La Liga. It built incredibly on an impressive debut season for the player, at the club some doubted he could fit in to. Suarez has never looked out of place, and with Messi and Neymar beside him has only improved his game and competed at a higher level. Playing with such great players has clearly raised the game of the Uruguayan, who also shone while in the Premier League with Liverpool.

Suarez’s movement and instincts in attack have been paramount to his success at Barca, and his ability to take up key positions in the penalty area and float dangerously outside it have seen him not only notch goals himself but also open up more opportunities for his partners in crime. Humble, unselfish, hard working - Suarez has become a popular figure at Camp Nou and one whom people now look upon for inspiration in games.

It's obvious Neymar is still growing, and Messi can’t always do it all on his own. In then, comes Suarez. The 29-year-old rarely disappoints when pressure is put on his shoulders – instead he turns up and gets the job done in expert fashion. There are no histrionics with him. His private life remains quiet, and on the field he lets his goalscoring do the talking. He’s very much an unassuming character in the team that all the world wants to see, but make no mistake he’s also the most deadly.

His finishing has only improved since his Liverpool days. With Suarez now operating at a higher level he realises waste isn’t acceptable. The only blot on his copybook over the past 12 months has been an injury at the end of the domestic season that shattered his Copa America participation. Suarez was in the Uruguay squad for the tournament, but didn’t make it on the field as his beloved nation exited without even a whimper.

Next surely for Suarez is reaching the pinnacle of world football after now breaking into the Ronaldo and Messi monopoly thanks largely due to his goalscoring. No one else is scoring with such aplomb at a high level, and at 29-years-old he is at the very peak of his powers.