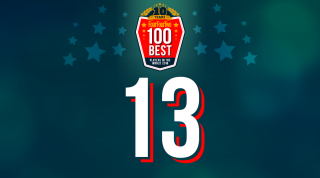 In 2015, it was clear that Pierre-Emerick Aubameyang had become the striker Borussia Dortmund had always hoped he would be, crowning a remarkable 12 months by being named African Footballer of the Year. The 27-year-old didn’t break as many records in 2016, but there can be no denying his place among the striking elite.

There were several signs of that at the end of last season. Against Stuttgart in the German Cup quarter-finals, he showed remarkable poise and skill to find the net. He then scored a similar goal against Sporting this season, highlighting his consistency in front of goal.

At the start of the 2016/17 campaign, Aubameyang had never gone longer than one game in all competitions without a goal for Dortmund. Sixteen games into the new season he already has 16 strikes to his name, including an instinctive and important winner against Bayern Munich.

Aubameyang is a player at the top of his game – the Gabonese road-runner is now up there with Luis Suarez, Sergio Aguero and the man whose ghost he’s banished at BVB, Robert Lewandowski. He uses his pace more effectively these days, pinning defenders down and regularly leaving them trailing in the wake of his bright boots. Most importantly of all, he scores more: since joining Dortmund, Aubameyang has improved his goal tally season on season and is on course to do the same this term.

He’s even had a rap record named after him, with the Gabon international and his best mate Marco Reus starring in the video. It made him even more endearing, just as his obvious joy when playing football does. After all, it takes something for a modern-day player to drive an outrageously flashy car and star in a rap video without being laughed at.

Perhaps the one thing Aubameyang needs to improve are his performances in the biggest games. In last season’s Europa League campaign, he showed flashes of his quality – mostly notably against Tottenham – but didn’t deliver enough when it really mattered.

That strike against Bayern in November is a positive sign of change, although his miss against the same opponents in the German Cup final earlier in 2016 still makes for tough viewing. His goal-to-shot ratio may well be improving, but there’s still a fair amount of doubt when he races through for a one-on-one with the goalkeeper. It’s for that reason that any comparisons with Thierry Henry should be made tentatively rather than assertively.

Aubameyang is likely to reach 100 BVB goals before 2016 is out, though, while he’ll also close in on 200 appearances in the coming months. Dortmund has become the perfect home for him, allowing the striker to develop his game in an environment where he’s the main man.

Aubameyang has had his moments of controversy, however. The 27-year-old was suspended for November’s home game against Sporting after breaking squad rules by taking an unauthorised trip abroad. Three days later, he scored four goals in 49 minutes against Hamburg, before admitting his mistake and revealing he’d apologised to manager Thomas Tuchel.

Dortmund fans will be thankful he’s now back doing what he does best: scoring goals.