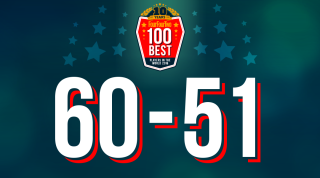 Remember: the FFT Top 100 covers a 12-month period. That includes twice as many league games from last term as this season.

With that in mind, Mkhitaryan’s meagre two starts in 2016/17 – Jose Mourinho being oddly reluctant to play the £27m signing – are comfortably outweighed by the playmaker’s phenomenal 2015/16. After all, Mkhitaryan was named Player of the Year by 235 Bundesliga pros surveyed in German magazine Kicker and came third in the official players’ vote. How quickly we forget. How quickly Jose forgets.

The Armenian was reborn under Thomas Tuchel in his final Borussia Dortmund campaign. Mkhitaryan scored or assisted – and this isn’t a typo – 55 goals in 52 games, which is frankly obscene. Operating sometimes behind Pierre-Emerick Aubameyang but more commonly drifting in from the right, Mkhitaryan showed he’s a true raumdeuter, a space investigator, and one who knows where the goal is.

If that’s not enough, he speaks seven languages fluently and his dad was called Hamlet. – HD

Les Bleus may have reached the final of Euro 2016, but there must be a nagging thought in the minds of Frenchmen everywhere: what if Varane had played against Portugal instead of being ruled out of the tournament through injury? Would the Real Madrid man have been on hand to close down Eder’s shot? Could he have helped the hosts win the competition?

Didier Deschamps is certainly delighted to have his defensive general back, while in the Spanish capital Varane is finally holding down a place in the starting XI. After starting 23 times in La Liga last term he's become an integral part of Zinedine Zidane's table-topping outfit this season, matching Pepe for interceptions and clearances. – AG

It’s been quite the year for Kimmich, who has spent 2016 as a centre-back under Pep Guardiola, a right-back under Joachim Low and a midfield goal-getter under Carlo Ancelotti.

The youngster established himself as a key squad member at Bayern Munich under Guardiola last term, belying his diminutive frame to make the transition from midfield to defence – a positional switch from which Guardiola had previously reaped the benefits when Javier Mascherano dropped into the back four at Barcelona.

Then came a call-up to Germany’s squad for Euro 2016 and a place in the starting line-up to face Northern Ireland in the world champions' third game. Despite playing out of position at right-back, Kimmich flourished to such an extent that he stayed in the side, while he even earned a place in the team of the tournament.

Returning to Bayern for the new season, he was soon restored to his more favoured midfield role under new boss Ancelotti and went on a goal spree – netting eight times in 11 games. At 21 it’s likely that he'll only continue to improve from here. – CF

“Keep your head up. I know you’re a good player. You’re a big part of my plans. As long as you work for me, I’ll fight for you.”

Sterling could have sunk without a trace in 2016/17. The winger – still only 21, even with 200 first-team appearances to his name – had endured a transitional first season at Manchester City followed by a difficult Euro 2016, which included dog’s abuse from vocal England fans and a character assassination in the media that was nothing short of disgraceful.

But those words from incoming City boss Pep Guardiola changed everything. As Sterling told FFT: “It was a massive boost. I said to myself that if I come back, work hard and forget what everybody else thinks, I know what I can do.”

Sterling registered five goals and six assists in his first 10 games under Guardiola. October ushered in a fallow period, but it shouldn’t last. All he needs is a Pep talk. – HD

If 2015 was good for Lacazette, this year he's taken his game to another level. The 25-year-old forward ended last season with 15 goals in 19 games, helping Lyon finish second in Ligue 1 and ending PSG’s unbeaten run.

Although doubts surrounding his future persisted, he remained at OL and started the current campaign with a bang, netting a hat-trick against Nancy on the opening day. Injuries have again played their part, though, and his failure to light up the Champions League has prompted suggestions that the striker has done everything he can at his boyhood club. It's therefore time for Lacazette to make the step up and try his luck elsewhere, otherwise it could be too late to challenge for a place in France's World Cup squad. – AG

There's little doubt that Juventus's ability to sign Pjanic in the summer was a major factor in the Bianconeri sanctioning Paul Pogba's sale for a world-record sum. Able to play anywhere in midfield, the Bosnian has already filled in for the injured Claudio Marchisio as a deep-lying playmaker, flanked the Italian after his return and shone in a more advanced role behind the strikers.

Pjanic possesses an excellent range of passing and neat dribbling skills, while his shooting – particularly at set-pieces – has become increasingly deadly. He weighed in with 12 goals and 13 assists for Roma last season, meaning he hit double figures in both for the second successive campaign, and had already added three more goals this term by the time Serie A paused for November’s international break. – AD

James has had a topsy-turvy time in Spain since joining Real Madrid to great fanfare in 2014. The last 12 months have been particularly underwhelming, with injuries and bad habits on and off the pitch coming to the fore.

There's little doubt the Colombian has regressed in the last two years, cast into the shadows by the likes of Gareth Bale. Regular runs in the first team have been rare, and something needs to change in the next 12 months if he's to kick on once more: James should be mixing it with the Ballon d'Or elite, but instead he's out in the cold at the Bernabeu.

He's suffered with his national team too, taking much of the blame for Colombia's disappointing showing at the Copa America Centenario. James needs to shape up (quite literally – his off-field activities remain dubious) and get back to being the Galactico who shone at the World Cup in Brazil. – DC

Next: Consistency is key

After helping steer Barcelona to yet another trophy under Luis Enrique last season, there were whispers during the summer transfer window that Mascherano might be ready to move on.

Rumours can be misleading, however, and Mascherano put pen to paper on a new contract extension at Camp Nou in October, which will see the Argentine through until June 2019. The ex-Liverpool midfielder has been a big-game player for Luis Enrique and his Barça predecessors, missing just one competitive final since joining the club in 2009.

International glory continues to evade the midfielder, however, after Argentina lost out on penalties to Chile in the Copa America Centenario final (again). Mascherano at least netted a high-pressure spot-kick after Lionel Messi missed la Celeste’s first, and he still provides a warrior-like fighting spirit in the engine room which enables him to drag his compatriots towards the finish line despite his advancing years. – SH

While Di Maria's early PSG career must have felt like a dream, 2016 has been a strange nightmare. The Argentine lifted the Ligue 1 title, Coupe de la Ligue, Coupe de France and set up Zlatan Ibrahimovic to knock Chelsea out of the Champions League in his first season in France, but he's only scored five times in the league since the turn of the year and has struggled under new boss Unai Emery.

The former Real Madrid forward has still racked up assists and shown plenty of quality, but his influence in the final third has undoubtedly decreased. Without their Swedish talisman Ibrahimovic, PSG need Di Maria to rediscover his best form sooner rather than later. – AG

In a year in which Liverpool have progressed from also-rans to title contenders under Jurgen Klopp, their most influential player has been Coutinho. The Brazilian has long been a fans’ favourite at Anfield, but at 24 he's started to develop a consistency to his game that had sometimes been lacking in the past. He’s also benefited from the form of compatriot Roberto Firmino, with the pair forming a fine double act in a rampant Reds attack.

Coutinho scored seven goals and provided four assists in the second half of last season, while also netting in the final of the League Cup and helping Liverpool to the Europa League final. By mid-November he’d already racked up six goals and six assists in 2016/17, as Klopp's charges topped the Premier League table.

The ex-Inter man's performances at Anfield also earned him a call-up to the Brazil squad for the Copa America Centenario, where he bagged a hat-trick against Haiti. – CF