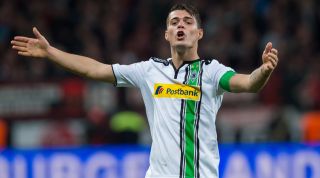 Xherdan Shaqiri has long been considered the top Swiss talent of Kosovar origins, but that view has been gradually changing recently with Granit Xhaka quietly becoming the preeminent figure. The midfielder has become a leader in the Borussia Monchengladbach engine room after joining the club in 2012, with top clubs around Europe - including Bayern Munich, Liverpool and Arsenal - so impressed with his form that they are reportedly interested in signing him either this month or in the summer.

Like Shaqiri, Xhaka’s development took place at the excellent Basel academy. His career was at risk following a cruciate ligament injury sustained at the age of 16, but Xhaka made a full recovery and was fortunate enough to be included in the Switzerland squad for the Under-17 World Cup in Nigeria in 2009, where he assisted the winning goal against the hosts in the final.

Ottmar Hitzfeld, then coach of the country’s senior side, compared the young midfielder to one of the world’s best midfielders after his full international debut in 2011. “I see similarities between Granit and Bastian Schweinsteiger, whom I promoted to the first team at Bayern Munich when he was 18,” Hitzfeld said. “He is extremely mature, highly intelligent, reads the game well and has good technical skills.”

Xhaka was instrumental when Basel qualified for the last 16 of the Champions League at the expense of Manchester United in 2011/12, before leaving his boyhood club for Gladbach who paid €8.5m for his services that summer.

Coach and compatriot Lucien Favre didn't rush things, and Xhaka’s first season in the Bundesliga was relatively average. He soon became crucial to the team, however, dictating the tempo from deep before darting forward to the opposition box. He played 30 times as Gladbach finished third and qualified for the Champions League last term.

The Foals' disastrous start to this season led to Favre resigning, but Gladbach have recovered magnificently under Andre Schubert and now sit fourth in the Bundesliga table. Xhaka has been integral to their revival and was even given the captain’s armband, while regular skipper Martin Stranzl was sidelined with injury; the Swiss star has also contributed three goals already this season after finding the  back of the net just three times during his first three league seasons in Germany. Comparisons to Schweinsteiger look more and more reasonable these days.

Xhaka could be on his way to becoming the perfect midfielder. He is a great passer, with his ability to deliver pinpoint long diagonals forward leading some to see him as Xabi Alonso’s heir at Bayern. Xhaka is a natural leader who always demands the ball, while his tackling has notably improved over time.

Xhaka is also vastly experienced for a 23-year-old: he has 39 Switzerland caps, four of which were won during a moderately positive World Cup in Brazil, where he scored in the 5-2 defeat at the hands of France. Under current boss Vladimir Petkovic, Xhaka is set to replace Gokhan Inler as the team's most important midfielder ahead of Euro 2016.

Xhaka's style of play is very emotional, which is undoubtedly his most significant weakness. He tends to pick up a lot of yellow cards – 32 in his last 73 Bundesliga fixtures – and has been sent off for two bookable offences on four occasions.

The worst incident to date occurred in the very last game of 2015, when Xhaka kicked Darmstadt's Peter Niemeyer (below) and received the first straight red card of his career. He has been given his marching orders three times already this season, and with opponents now regularly attempting to wind him up, Xhaka will have to learn to control his temper much better if he's to impress someone like Arsene Wenger.

In a football sense, he is not the quickest of players and can struggle to track rapid midfield runners. He will also be looking to improve his goalscoring record in the future, although there have been signs of improvement in that regard of late.

“Granit is one of the best players in the Bundesliga,” said Max Eberl,  Borussia Monchengladbach's director of sport. “We paid a lot for him, but it was worth it. He works very hard, but needs help with his emotions.”

David Nienhaus, a German journalist who covers Gladbach, agrees about his potential. “Xhaka can succeed in the Premier League, but I think Bayern will be the next step in his career,” he said. “He will be one of the best player in Europe, and he is also a very nice guy – polite and funny.”

Xhaka was born in Basel, but his parents come from Kosovo and he is very connected to his roots. Taulant Xhaka, Granit’s older brother, recently chose to represent Albania, meaning the siblings are set to play against each other at Euro 2016.

It is still unclear whether Xhaka will be on the move in January, but it might be wiser for him to stay put at Gladbach until the Euros. He is likely to be sold for a very hefty fee in the summer, though, with a recent contract extension virtually guaranteeing the German outfit a large sum when Xhaka does move on to pastures new.