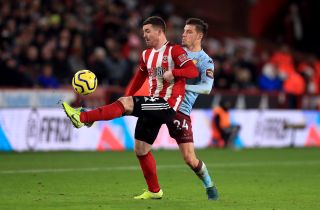 The Premier returns this evening after a three month hiatus: the early kick-off sees Aston Villa  hoping to kick-start their survival bid with a win over surprise European chasers Sheffield United at Villa Park.

Jack Grealish and co have a game in hand over their relegation rivals and will be deserpate for a win. Meanwhile, the Blades would give their chances of qualifying for continental football next season a huge boost with three points.

Villa have lost two of their last three league fixtures against the Blades, and Sheffield United have one of the best away records in the Premier League this season: they've only lost to Liverpool and Manchester City on the road so far, while only the league leaders have conceded fewer goals away from home.

Though more eyes may be on the later kick-off, neutrals could be in for a treat: in last season's fixture, Sheffield United held a 3-0 lead going into the final 10 minutes, only for a Villa comeback to see the game end all-square.

Kick-off is at 6pm BST and the game is being shown on Sky Sports Premier League in the UK. See below for watching details where you are.

If you’re on holiday or just simply out of the country, your domestic on-demand services won’t work – the broadcaster knows exactly where you are from your IP address. Your access to the game will be automatically blocked, which is annoying if you’ve paid a subscription fee and don't want to use an illegal, buffering stream that makes you miss another Wilfried Zaha nutmeg. And that's where we recommend ExpressVPN (more on which below).