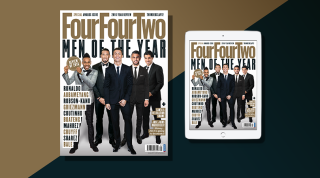 So 2016 was weird. That’s why we’re celebrating 12 months of shocks, surprises and upsets with our Men of the Year roll call, which features everyone from Leicester City, Michail Antonio, Hal Robson-Kanu and even Donald Trump (courtesy of our Woman of the Year, Megan Rapinoe)

Less surprising is the inclusion of double European champion, Cristiano Ronaldo – also named No.1 in our annual FFT100 last week. We chat to Germany’s player of the year Jerome Boateng at his home, and also sit down with the hottest striker in the world right now, Pierre-Emerick Aubameyang.

We hope you enjoy reading the issue over the festive period as much as we enjoyed putting it all together. Some might even say that getting a subscription to FourFourTwo would make the perfect Christmas present… after all, who else would go all the way to Lapland for a kickabout with Santa?!

Man of the Year

Champions League and European Championship medals in the bag make 2016 Cristiano Ronaldo’s most fruitful year to date. Next up, he says, is a plan to conquer Hollywood…

How Leicester shocked the world

The Foxes' unfathomable Premier League title win made headlines across the globe. Players, staff members, broadcasters and fans give us their own tales behind FFT’s Team of the Year.

Woman of the Year

In a year that has seen a huge change in the USA’s political landscape, veteran USWNT midfielder Megan Rapinoe has been at the forefront of a movement protesting social injustice and racism. She tells FFT all about it...

At home with Jerome

Five years after leaving Manchester City a misfit, Bayern Munich’s Jerome Boateng is arguably the world’s best centre-back. FFT pops round for a cuppa to talk trainers, trophies and tips from Jay Z.

Breakthrough of the Year

Refusing to let his dreams fade and die, Michail Antonio has seldom had more to smile about. The West Ham hero and FFT’s Breakthrough Man of the Year discusses his route to the top (and tells us our shoes are rubbish).

Goal of the Year

The highlight of Wales’ wondrous Euro 2016 was their cult hero flummoxing three Belgians to secure a semi-final spot. We meet up with our Goal of the Year winner.

Fans of the Year

Nobody gave their team a prayer at Euro 2016, but Iceland’s fans gave them full-blooded backing and got the miracle they deserved – if you can call beating England a miracle…

Icon of the Year

Few people knew the great Johan Cruyff as well as Jaap de Groot, the man who not only ghostwrote the Dutch legend’s weekly column for newspaper De Telegraaf and his 2016 autobiography, My Turn, but was his close friend for 30 years. He lifts the lid on Cruyff’s final months to FFT.

Former Celtic, Barcelona and Manchester United hero Henrik Larsson answers your questions in this month’s One-on-One: did he play in Scotland for too long? How gobby was a 20-year-old Zlatan? And would he let his son play for Rangers? Find out...

We're approaching that most wonderful time of the year, but for the most festively named club in football, 2016 hasn't really been a year of goodwill. FFT went to Lapland to learn why.

In only a decade, the video-sharing service has turned supporters into experts, players into memes and tricksters into stars. But how?

Middlesbrough’s Premier League return came on the anniversary of their most memorable campaign, featuring stellar names, two cup finals and, 20 years ago this month, a very costly cancellation...

Manchester City new boy-in-wait Gabriel Jesus talks to us in Upfront. The 19-year-old forward chats military prisons and joining up with Pep in January.

Liverpool schemer Philippe Coutinho talks to FourFourTwo Performance about how to unlock defences using your smarts – and a smile...

Available from December 7 in print, on iPad and iPhone or subscribe to FourFourTwo here!