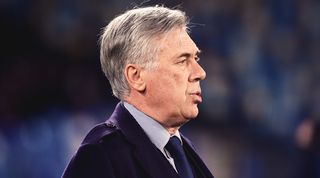 The new issue of FourFourTwo magazine is in shops from April 29, and celebrates the 100 greatest managers of all time. So this week, we're giving you loads and loads of manager quizzes on the website this week. Let's hope you know your Munoz from your Michels....

Has there ever been a manager that's worked with better players than Carlo Ancelotti?

The Italian mastermind was in the eye of the storm when Italy ruled Europe in the 2000s, first with Juventus, later with AC Milan; he's been at Chelsea with their golden generation and later on, he won trophies with a historic Real Madrid side, before working with a few Bayern Munich legends.

It's been quite the journey. He's even worked with a few younger talents at Napoli and Everton who could go onto be top players in the next decade or so.

He's one of the most successful, charismatic and downright handsome managers to ever coached in the game (seriously, check out photos from his playing days - handsome chap). But today we'd like you to name his top appearance makers at every club he's managed since the turn of the century.