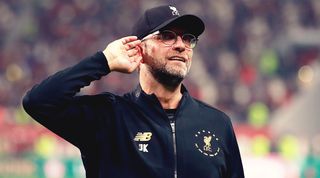 Eight minutes on the clock, 42 names to guess.

Remember to tweet your scores @FourFourTwo and send to some friends - especially if they're Reds...

After 30 long years, two more Champions League titles and plenty of near misses, Liverpool are the champions of England.

How does that sound, Reds fans? It's thanks to one man, too.

Well - plenty of men have played their part. 42 players have made 10 or more appearances in the current era, but really, it's all thanks to one Jurgen Norbert Klopp, the perma-happy, floppy-haired, gegenpressing, passionate German on the touchline who has built this team.

Well done, Jurgen. You've done a smashing job. You get the feeling too that this isn't the last time we'll be saying those words, either.