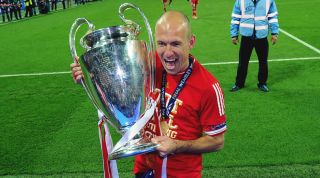 NOW TRY Quiz! Can you name the XIs that Atletico Madrid played in their last three European finals?

Bayern Munich are European football royalty: easily the biggest side in Germany and five-times winners of the Champions League.

But the Bavarians aren't always successful in the Champions League final. In fact, they've lost it more times than any other club in the history of the tournament - dating all the way back to the mid-50s.

After winning the trophy three years on the trot in the 70s, Bayern had to wait a long time to hold it again; they won the Champions League in 2001, however, either side of Real Madrid victories. In 2010, they were back in the final, but thwarted by Jose Mourinho's Inter Milan.

In 2012, they must have felt it was their year: at home at the Allianz Arena to a poor Chelsea side, heading to penalties - what Germans do best. But no - the Blues got the better of them. Finally, they won that elusive fifth Champions League the following season at Wembley, beating Jurgen Klopp's Dortmund. Tonight, they're looking to get to another semi-final...