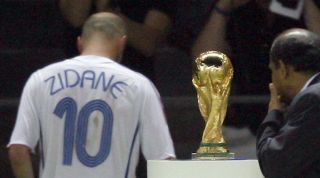 Four minutes on the clock, 22 players to guess.

NOW TRY Quiz! Can you name every player to score in a Klopp vs Guardiola game?

The 2006 World Cup final was a classic of sorts. Here at FourFourTwo, we've been racking our brains over a big incident that happened. We just can't remember.

It was the second final that France had made, following their win in 1998 and calamity in 2002. The French had come of age again and looked unstoppable through the knockouts.

Then there was Italy, in the midst of a golden generation, sweeping all before them in club competitions at the time. This was the era of AC Milan and Inter going deep in the Champions League - and the national side reached the apex too.

But what was that one thing that we're missing? It was something shocking... it'll come to us.

BAYERN MUNICH How Bayern Munich will look with Leroy Sané – but can their new signing help deliver Champions League glory?