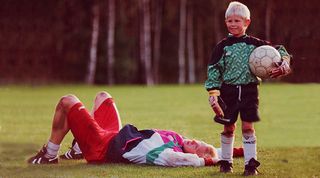 Paul Furlong played over 100 games for non-league Enfield before embarking on a professional career in the early 1990s, first spending a season at Coventry before moving on to Watford. Thirty-seven goals in 79 First Division outings for the Hornets earned the striker a transfer to Chelsea, whom he represented 64 times in the top flight.

Furlong went on to make more league appearances for QPR than any other side, and it was at Loftus Road that his son Darnell broke through in February 2015. The defender played three matches in the Premier League before Rangers’ relegation a few months later.

Nine years of Gordon Strachan’s managerial career came in the English top tier with Coventry and Southampton. Yet before that, the skilful Scot played in the division for both the Sky Blues and Leeds. A title winner at Elland Road in the final pre-Premier League campaign, the midfielder made 96 appearances after the start of the 1992/93 season.

Son Gavin hung up his boots in 2011 following spells with Corby Town, Hinckley United and St Neots Town. The ex-midfielder also has 13 Premier League outings to his name, all of which came when his old man was in charge of Coventry.

“There was a family issue,” then-Sunderland manager Gus Poyet replied when asked why he didn’t try to sign son Diego in 2014. “I would love to coach him, but at the same time it would be unfair on him. Do you think the players on the bench would accept it if I’m playing my son?”

We may never find out the answer to that question: Poyet Sr. is currently in charge of Bordeaux while Poyet Jr., formerly of West Ham, now plies his trade for Cypriot outfit Pafos. Former Chelsea and Tottenham midfielder Gus contributed 186 appearances, plus all 54 goals, to the family's Premier League totals.

Steve Bruce is hoping to guide Aston Villa back to the Premier League in the coming months, but it’s hard to see him ever replicating his playing feat of winning the top-tier title three times. The former Manchester United centre-back (a champion in 1993, 1994 and 1996) made 147 league appearances for the Red Devils after the First Division’s rebrand.

Alex Bruce, also a central defender, made his Premier League debut while his dad was in charge of Birmingham, before also playing for Bruce’s Hull side in the top flight. Now 33, he’s unlikely to add to the 48 games he’s already played at the summit of the English pyramid.

Steve Potts played 24 games for Dagenham & Redbridge in his final season as a professional in 2002/03, but spent the rest of his 18-year career at West Ham. Around half of his appearances for the Hammers came before the Premier League era, but the defender still played 202 league matches for the capital club from 1992/93 onwards.

Son Dan, 23, is a key part of the Luton team pushing for promotion from League Two this season, having joined the Hatters from West Ham in 2015. The full-back only managed two Premier League outings for the Hammers, but he could return to the top tier in future.

Unlike most of the Premier League’s father-son duos, it’s the younger Cork who’s racked up more appearances. Jack came through the ranks at Chelsea but never made a Premier League appearance for the club. He then embarked on a series of loan spells, before signing permanently for Southampton in 2011. Later of Swansea and now at Burnley, the midfielder has 187 top-flight outings to his name as of the start of March 2018, as well as an England cap.

Father Alan only played 46 games in the Premier League (all for Sheffield United), although his career was nearing an end by the time of the 1992 rebrand. Indeed, the fearsome-looking forward’s overall top-flight appearance tally stands at 218, with the vast majority of those coming during a lengthy stay at Wimbledon.

Long before he became an England international and Arsenal’s record goalscorer, Ian Wright was combining part-time football for Greenwich Borough with a job as a plasterer. Crystal Palace famously swapped a set of weights for the striker’s signature in 1985, before Wright went on to make 213 Premier League appearances for Arsenal and West Ham.

Bradley Wright-Phillips has established himself as one of the top MLS strikers in recent years, scoring 100 goals in all competitions for New York Red Bulls. Before that, he represented Southampton, Plymouth, Charlton and Brentford in the Football League. All of his 32 top-flight outings came with his first employers, Manchester City.

Rob Lee made almost as many appearances for Charlton as Newcastle, but it’s the latter club with whom he’s most closely associated. The former midfielder played 267 Premier League matches for the Magpies and scored 44 goals, before pulling on a Derby shirt 13 times in 2001/02.

Son Elliot is only 23 and may still have aspirations of a long-term stay at the highest level of English football, but the Luton striker was released by West Ham – the club he played for twice in the Premier League – after failing to convince them he was cut out for the top tier.

Kevin and Tyrese Campbell became the 12th father-and-son duo to play in the Premier League when the latter made his Stoke bow against Leicester in February 2018. The highly rated 18-year-old forward featured for 26 minutes in a 1-1 draw at the King Power Stadium, with his debut coming 4,326 days after Kevin’s final outing in the top flight.

A lithe forward, the Huddersfield man certainly bears little on-field resemblance to his midfield general father, who personally informed people that he was nicknamed "The Guv’nor" at Manchester United, Liverpool and Middlesbrough. Having made just 42 Premier League appearances for the Terriers, Crystal Palace and Hull, Tom still has a long way to go to match Paul’s total of 306 – not to mention his two winner’s medals.

Not only did Kasper follow his father’s lead by donning the goalkeeper gloves, he became the second Schmeichel to win the Premier League when Leicester stunned the world in 2015/16.

The younger man is unlikely to ever match Peter’s haul of five titles, but there’s still an outside chance he’ll overtake his tally of 310 top-flight appearances in England. The Foxes shot-stopper, who turned 31 in November 2018, needs to play another 183 games to do so.

The 26 maddest managerial sackings ever in football

Bradley Wright-Phillips was unable to surpass father Ian Wright in the Premier League appearance chart, but older brother Shaun succeeded with 315 games to dad’s 213 (let it be said, though, that Wright Snr. racked up a further 102 in the old First Division).

The London-born winger graduated from the Manchester City academy in the late 1990s and went on to play 153 league matches for the Citizens, even if many of his early outings came in the second tier.

The 36-time England international later had a second spell at Eastlands either side of stints at Chelsea and QPR. By the time of his move to MLS in 2015, Wright-Phillips had exactly matched his father's top-flight appearance total. Alongside the Schmeichels, Ian and Shaun are the only other father-son pairing to have won the Premier League.