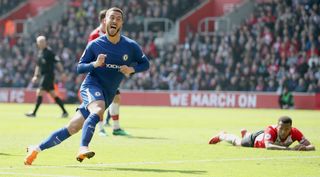 If you can’t quite get your head around xG, which would hardly be a crime, then read this fun-yet-informative feature first.

Because xG explains how easy or difficult a particular shooting opportunity may be, it can, among other things, give an idea of which teams and individuals are taking their chances well. If a player’s xG value across the season adds up to 10.2 and he's scored 15 goals, making his differential +4.8, then he’s probably having one hell of a campaign.

It’s not an exact science – theoretically, any of the players below could be consistently lucky recipients of handy deflections, serendipitous mishits or generous goalkeeping – but xG can offer something of a guide to which 20 players have been the best finishers in the Premier League this season. If nothing else, the identity of the top three should allay any fears that it’s a complete nonsense.

‘The Wee Man’ (at 5ft 4in, he’s shorter than Selena Gomez) has scored only four goals in 2017/18 but they all helped Bournemouth to a positive result – and he has had precious few chances presented on a plate.

At this point we’d like to welcome any American teenagers reading this after Googling ‘Selena Gomez’, only to accidentally open an article about hypothetical data in soccer.

Being named in the PFA Team of the Year was arguably a little generous, mind.

The best-performing teams have players converting chances more often than they ‘should’ according to said chances’ difficulty. It’s one reason why Tottenham surged to 86 points last season, and why they aren’t doing so this season – because in 2016/17, Dele Alli (+3.29), Son Heung-min (+6.23!) and Harry Kane (+9.18!!!) all vastly outperformed what would reasonably be expected of them.

This season, Manchester City’s dominance is implied by them having three players in this top 20. Aguero is the first: a personal return to form after last term.

A third of Barnes’s goals have come from fewer than six yards, so you wouldn’t expect him to outstrip his expected goals figure all that much. However, a handful of corkers include a pseudo-bicycle kick scored a few days before Cristiano Ronaldo’s Best Goal Ever™.

In absence of similar recognition for their man’s acrobatic strike, Burnley have at least ensured you can watch it on loop for an hour.

Although it seems surprising that Hernandez has the Premier League’s best conversion rate, turning 27.5% of his shots into goals, his seriously impressive ratio comes from a less surprising statistic: the Hammers poacher has hit 24 of his 29 shots from inside the area.

As a result, Hernandez’s xG differential is very healthy without being extraordinary, because he efficiently converts chances while rarely attempting the improbable… which, to be fair, is kind of the point.

The Frenchman may join Messrs Salah, De Bruyne, Lukaku, Bonucci and Robben in being sold in his early 20s by Jose Mourinho. He, too, could thrive elsewhere.

Martial’s shooting isn’t faultless – see his miss from six yards against Bournemouth – but neat finishes against Everton, Stoke and Burnley serve as a reminder that he showed potential as a striker before being given, literally and figuratively, a wide berth.

If you don’t buy a ticket, you don’t win the inflatable aubergine. Hence a shot-happy Shaqiri having 65 attempts – two-thirds of them from outside the box – for his seven goals.

Still, when you can place the ball as precisely as Shaqiri did to score against Newcastle, Brighton and Leicester – each goal defying an xG of 0.03 – then you’ll try anything.

Identifying where Sané has improved the most isn’t easy, but it may be the reliability of his shooting.

While wonderful strikes such as his volley against Everton rightly make the headlines, the 22-year-old’s technique wasn’t in doubt. Just as impressive is how quickly the German is becoming a dead-eyed killer in front of goal.

Twentieth in these rankings last week, De Bruyne surged up to 11th with a stonking strike against Swansea.

The highlight here is Eriksen’s ludicrous goal against Chelsea, with more dip than a Domino’s takeaway. Scoring out of nothing will always help your xG differential: essentially, it gives Eriksen one of his three ‘extra’ goals. However, he’s also increasingly reliable right in front of goal.

Monreal in our top 10 prompts the same reaction as Monreal in the opposition penalty area, namely: “What the hell are you doing here?”

His only Premier League goal before this season was in March 2013. Yet 2017/18 has seen the Spaniard pounce on rebounds and produce a tidy finish against West Ham to sextuple his tally, despite playing more regularly as a centre-half rather than at full-back.

Believe it or not, xG data suggests Vardy’s efficiency has only improved since Leicester won the title. A differential of +1.86 that season became +3.05 in 2016/17, when he had far fewer opportunities (his xG then was just under 10, compared to a little over 22 the previous year), and now it’s +3.29.

This time, however, there have been no stupendous long-distance strikes with an xG value of 0.000001 – Vardy has simply been deadly from close range. All 17 of his goals have been scored within the area – though they do include those glorious first-time efforts against Tottenham and West Brom.

While Gross chiefly creates chances (the most in the Bundesliga last season and the Premier League’s sixth-most since he joined Brighton), he also converts a few himself.

He’s had a bit of help, mind. Two of his six goals involved very questionable goalkeeping and his first had a low xG because there were six – six! – players between him and the goal... except that when you’re shooting directly into the feet of three defenders, a deflection can do the job for you. He’s scored a couple of fine 20-yarders as well, however, so it’s not all Gross point blank.

Anecdotal evidence says Mahrez isn’t clinical: he has missed several big chances, including a borderline sitter in the Foxes' 1-1 draw with West Brom. He keeps getting into great positions, though, and marvellous goals from distance against Spurs, Southampton and Bournemouth help to explain his high ranking here.

Although the midfielder’s collection does include a very obvious handball against Southampton, his high ranking owes plenty to a pair of stunning strikes from distance with a combined xG of 0.03.

However, while criticising xG here would be having our cake and eating it, we will question Doucoure’s goal against Liverpool having an xG value of 0.65, implying that one time in three, he’d miss this:

We’ve said elsewhere that for all his unquestionable talent – because of it, in fact – Hazard could arguably be more productive. Across his time in England, he has consistently contributed a goal or assist roughly every 140 minutes, or once every game and a half. It’s not a bad ratio, but worse players have bettered it.

However, Hazard’s data suggests we’re being harsh in our assessment. Each season, he outscores his xG value. In 2017/18 he is regularly converting half-chances that too many of his Chelsea team-mates aren’t.

If it seems fitting that Firmino is playing second fiddle to you-know-who in this top 20, it should also be remembered that an xG differential of +5.07 is incredibly good nonetheless.

Above all, the Brazilian has been clinically efficient in 2017/18. All 15 of his Premier League goals have come from inside the 18-yard box and he’s missed very few gilt-edged opportunities. And still some English pundits say Liverpool need to buy a No.9...

What else is there to say about Salah? He's scored in 23 of his 33 league appearances for Liverpool, is seemingly about to break the Premier League’s single-season (38-game) goalscoring record, and was named PFA Player of the Year ahead of Kevin De Bruyne, who looked a shoo-in until spring.

Right now, a goal seems inevitable from the moment the ball lands at Salah’s feet almost anywhere on the pitch (even though 29 of his 31 goals have come from inside the area). It’ll be fascinating to see how he fares next season: there’s no doubt that he's an incredible talent, but is this the mother of all hot streaks or the start of something truly special? We can’t wait to find out. For now, let’s just enjoy the ride.