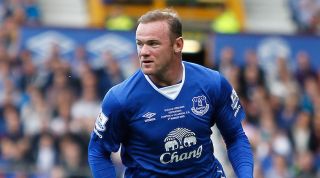 Excited hacks broke the news on Tuesday that Rooney won’t be joining Manchester United on their pre-season tour to America – because a deal to take him home to Goodison Park was all but done. Everton chairman Bill Kenwright is reported to have met with Rooney’s agent Paul Stretford this week, and – despite interest from elsewhere – Merseyside is the most likely destination for the 31-year-old.

The latest stories suggest that United are so keen to offload his £230k-per-week wages that Everton won’t pay a transfer fee, while Rooney will take a hit of £80k per week to re-join his boyhood club.

And so begins the domino effect. For so long this window it’s seemed as though Lukaku was nailed on for Chelsea, but Thursday’s bombshell came in the form of a £75m move to Old Trafford being agreed instead.

There was, however, some confusion: initially it was suggested that Rooney would be a makeweight in the deal, though that doesn’t appear to be the case. Then Sky Sports motormouth Jim White declared that no such fee had been rubber-stamped, despite widespread claims elsewhere reporting that to be the case. Chelsea are desperate not to lose this one – Antonio Conte wants Lukaku more than any other player this summer.

Amid the Lukaku hoo-ha, Costa is believed to have already said his merry goodbyes to team-mates, despite not yet having confirmed himself a new club. He was certainly told he wasn’t wanted at Stamford Bridge earlier this summer, though, and even if Chelsea don’t get their No.1 target it seems the Brazil-born antagonist will go regardless.

Atletico Madrid are thought to have all but sorted a return for their former striker, but their problem lies in not actually being able to register new players until January due to a transfer ban. In the meantime, a loan move for Costa could be on the cards.

According to The Telegraph's well-connected East Midlands correspondent John Percy, Leicester are very confident of beating off the competition to sign the 20-year-old for around £25m.

It seems like a good move all around: though Iheanacho will still have to fight for a place with Jamie Vardy around, he’s certainly more likely to better his tally of only five Premier League starts from last season. The Foxes, meanwhile, would add to an impressive bundle of summer business that already includes Harry Maguire (Hull) and central midfielder Vicente Iborra (Sevilla).

Why is this move interesting? Because it’s basically ludicrous. Portugal international Neves has been touted as one of his country’s finest prospects for a long time, having captained Porto in the Champions League when he was just 18, and been previously linked with the likes of Arsenal and Liverpool.

Yet Jorge Mendes’s tentacles stretch far: having been involved with the Chinese consortium that took over Wolves last season, he then got his client Nuno in as manager, and now looks to be masterminding the £15m deal for Neves here. But money or otherwise, quite how he has convinced his now-20-year-old client to drop into England’s second tier is unclear.

As good as done for £35m and set to be completed next week, according to reliable sources. Versatile defender Rudiger apparently completed a medical while on a post-Confederations Cup holiday in Los Angeles this week, having helped Germany win the tournament.

The 17-time capped 24-year-old has been with Roma since 2015 and was a Blues target back then, but he now feels as though his chances of first-team football at Stamford Bridge are much better. With the likes of John Terry and Branislav Ivanovic having left since then, he’d be right.

This one has been quietly bubbling under the surface for a couple of weeks, but it seems as though Arsenal are going to step up their efforts to sign the tricky Leicester wideman now that their pursuit of Alexandre Lacazette has been completed.

Mahrez told Leicester – and everyone else – of his desire to leave soon after the season ended. Now it’s a case of agreeing a fee that Leicester are happy with; the former champions are hankering for £50m, but Arsenal seem unwilling to budge beyond £35m at this stage. There’s probably some middle ground to be found.

Portugal international Carvalho has been linked with a Premier League move since he was a foetus (or that’s what it feels like anyway) – so is this the summer he finally comes to England?

The imposing central midfielder, who helped his nation win Euro 2016, is still only 25 but may fancy a fresh challenge having impressed as a regular presence at the heart of Sporting’s midfield for the last four seasons. Crystal Palace, West Brom, Arsenal and Manchester City have all been linked – the latter perhaps unsurprisingly, since Carvalho’s agent is Pere Guardiola, the brother of Pep.

Hart doesn’t appear to have too many options this summer: Manchester City have long moved on, and his loan spell in Serie A with Torino last season was no roaring success. Everton have signed Jordan Pickford, and it isn’t yet clear whether West Ham really want him or not.

Watford have popped up in reports this week, though only in the local paper’s attempts to get a comment from the agency that represents Hart (their response: go away). Aston Villa are now second favourites with the bookmakers to sign him, but a current wage of £125k per week is going to make potential suitors thing very hard before making a serious offer.

Poor Giroud has found himself very much in the unwanted category at Arsenal this week, what with the Gunners completing a move for the 26-year-old Lacazette – a rival the former keeps out of France’s team, no less.

Still, there’s no shortage of clubs who are willing to give him a new home: first it was West Ham, who are so desperate for a good striker that legitimate concerns exist about who they’ll actually end up copping off with by the end; then Everton were thrown into the mix; but in pole appear to be Marseille. They’re most confident of landing the Frenchman, say The Telegraph – perhaps led on by Giroud’s apparent openness to a move there as he revealed last month.