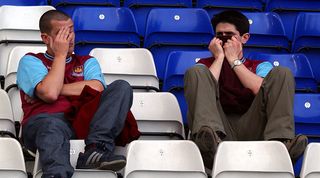 Younger football fans will only know City as the Abu Dhabi-backed, big-spending global powerhouses of today, but the club had a very different identity for much of its history.

The 1937/38 season was perfectly representative of the phenomenon known as ‘typical City’ or ‘City-itis’: Wilf Wild’s men, who were reigning First Division champions, were relegated with a positive goal average and the league’s best scoring record. Over 70 seven years on, they remain the only English side to top the division and then suffer relegation the following campaign.

SEE ALSO The craziest season in English football – when the champions went down, and ‘Lucky Arsenal’ annoyed the nation

When Germany finally introduced a professional league in 1963, there was, predictably, an initial state of flux: seven different clubs won the Bundesliga in the first seven years of its existence. Nürnberg were one of those, lifting the league title in May 1968. Twelve months later they were relegated.

Despite that championship win, manager Max Merkel brought in 13 new players and let 11 go, including the prolific striker Franz Brungs. Nürnberg’s new squad never really gelled and Der Club were sent down on the final day after a 3-0 loss at Köln.

A brief renaissance in spring – United gained nine points from a possible 10 against Chelsea, Burnley, Norwich, Everton and Newcastle – looked like it may be enough to lift the Red Devils out of trouble, but a draw and three losses in their final four games condemned the European Cup winners of 1968 to the second tier.

United’s problem was scoring goals: they managed just 38 in their 42 league games, with goalkeeper Alex Stepney’s two penalties enough to make him the club’s joint-top scorer at Christmas. That 1-0 defeat to City in the season’s penultimate game saw United relegated for the first time since the 1930s.

For four years, Swansea showed everyone exactly how not to run a football club.

An outstanding rise saw Swansea soar from the Fourth to First Division in four years between 1977 and 1981, but the fall was equally rapid. The club was dogged with financial problems between 1982 and 1986 and couldn’t prevent their dramatic bottom-to-top ascent in reverse.

Each season they appeared ‘too good to go down’ but proved people wrong time and again. In the wrong way.

Everyone has their favourite Brian Clough quote, be it about the building of Rome in a day or being in the top one managers in the business. An interview with his friend Barry Davies just minutes after Forest’s relegation in 1993 is rather more distressing and poignant to watch than the sharp, mischievous and more well-known exchanges with Don Revie and John Motson, however.

In the clip, Clough is close to tears having just seen his side relegated from the inaugural Premier League in his final season at the City Ground. His alcoholism had long set in by this stage and, despite the emotional farewell he received from grateful Forest fans following the fatal 2-0 defeat to Sheffield United, this was an avoidable relegation.

The side of 1992/93 were significantly weaker than the back-to-back European Cup winners of 1979 and 1980, yet they were still good enough to survive: Teddy Sheringham may have been inexplicably sold to Tottenham the previous summer with Des Walker also departing, but the squad could still count on Clough’s son Nigel, Stuart Pearce and Roy Keane. Nevertheless, Forest spent most of the season rooted to the bottom and Clough’s extraordinary managerial career ended with a rare taste of failure.

SEE ALSO The Battle for Old Big 'Ead: Did Cloughie's heart belong to Derby or Forest?

Champions in 1990/91 and boasting a proud record of having never been relegated from the Bundesliga, Kaiserslautern went down in May 1996 to the great surprise of German football fans everywhere.

The Red Devils had come fourth the previous season and were hoping to replicate that heading into this campaign, but a penchant for drawing games proved the southerners’ undoing. Eighteen matches were tied, meaning Kaiserslautern lost just 10 times – the same as second-placed Bayern Munich.

Their defensive record was also very good, with only Schalke conceding fewer than their 38. Six wins from 34 games was a dreadful return, though, and Kaiserslautern duly fell through the trapdoor.

In the end, things worked out for the better. Indeed, as recoveries go, theirs takes some beating: Kaiserslautern won the German Cup a week after their demotion was confirmed, and went on to lift the Bundesliga title two years later.

The Napoli of 1997/98 were nowhere near as talented as the scudetto-winning version that featured Diego Maradona, Ciro Ferrara and Gianfranco Zola eight years earlier, but they still should have been more than good enough to retain their place in Serie A.

Four managers were employed throughout a tumultuous campaign where the Partenopei earned just two wins and 14 points.

Scoring only 25 goals and conceding 76 was never likely to be a recipe for success, and a team containing Robert Ayala, Claudio Bellucci and current Juventus coach Max Allegri were as good as relegated by March.

NEXT: When you have the league's second-highest scorer and still drop

The nadir. In December 1999, just short of the season’s halfway point and with Atletico barely outside the drop zone, president Jesús Gil and his board were suspended amid allegations of the misappropriation of club funds. An administrator was appointed by the government to run the club, whose long-term future was thrown into doubt.

The players – Jimmy Floyd Hasselbaink, Joan Capdevila and Juan Carlos Valeron among them – struggled to deal with the off-field distractions, although Hasselbaink did end with 24 Liga goals and was only outdone by one other player. Claudio Ranieri resigned as manager in February with Los Rojiblancos still hovering precariously above the bottom three; his replacement Radi Antic couldn’t prevent them from dropping into it and, just four years on from their ninth league title, Atletico were relegated.

It got worse too – they went on to lose the Copa del Rey final to Espanyol, with Jimmy Floyd's 90th-minute consolation his final act for the club.

The Hammers collected 42 points – which would have been enough to survive in any other 38-game Premier League season – yet finished below the dreaded dotted line despite the embarrassment of riches in their squad. Club legend Trevor Brooking replaced Glenn Roeder in the dugout in April, hoping to inspire a late-season surge, but it wasn’t enough.

When Bolton beat Middlesbrough 2-1 on the final day, West Ham were condemned to Division One just four years after attaining their second-highest top-flight finish of fifth under Harry Redknapp.

There are probably no words hated more in Leeds than ‘living the dream’. That was the infamous phrase uttered by former chairman Peter Ridsdale about his disastrous ownership of the Lilywhites, which has forced the three-time English champions outside the top flight ever since.

Following a remarkable run to the Champions League semi-finals in 2000/01, Ridsdale gambled the club’s future by taking out huge loans which he intended to pay back through continued Champions League revenues. However, Leeds failed to qualify for Europe’s biggest competition for the following two seasons and were forced to sell a number of stars – see Nigel Martyn, Olivier Dacourt and Harry Kewell – to ward off financial implosion ahead of the 2003/04 campaign.

The likes of Alan Smith, Paul Robinson, James Milner, Mark Viduka and Lucas Radebe remained, meaning Leeds’s relegation was still a shock, but it was probably only a matter of time before the club’s off-field nightmare caught up with them.

A slight twist on the theme here – Juventus weren’t actually relegated on the field but in the courts. Regardless, a squad packed with world-class internationals like Gigi Buffon, Patrick Vieira, Pavel Nedved, Alessandro Del Piero and Zlatan Ibrahimovic is probably the most talented to have ever gone down to a second division anywhere.

Juve’s crime was influencing the selection of referees rather than losing too many games. The Bianconeri amassed 91 points, were defeated just once and topped the table by three points. Notwithstanding such playing excellence, their actions away from the pitch led to an ignominious relegation.

INTERVIEW Buffon One-on-One: "Serie B... that season was an experience"

In truth, the 2005 triumph masked some serious problems at the club. A lack of funds earlier in the decade convinced Corinthians directors to sign a controversial deal with Kia Joorabchian’s Media Sports Investments, which saw a substantial amount of control sanctioned off in return for funds which could be used to sign high-profile players like Tevez, Mascherano and the highly-rated Brazilian Carlos Alberto (no, not that one).

But things didn’t work out well: the relationship between Joorabchian and the club’s management was awful, with both parties looking out for their own interests. The partnership was terminated in July 2007 but the rot had already set in, and Corinthians were sent down to Serie B in December.

The 2004 Champions League Final may have been missing Europe’s elite clubs, but it featured two magnificent stories instead. Porto, led by a boisterous up-and-comer called Jose Mourinho, memorably defeated Manchester United in the last 16, while Monaco’s scalps included Chelsea and Real Madrid.

Fast-forward seven years and Porto had won five more Primeira Ligas, Mourinho four domestic titles and another Champions League... while Monaco were being relegated to Ligue 2.

The principality team only lost 12 games – the lowest figure of all bottom-half outfits – but drew far too many times (17) and finished the season two points adrift of Nantes in 17th.

Of all the shocking relegations listed here, River Plate’s was perhaps the most astounding. In their 110-year history, the Argentine giants had never before competed in the second division; they are also the country’s most successful club domestically, having won 36 national titles and finished as runners-up 32 times.

The embarrassing fall into Nacional B was caused partly by a financial crisis that engulfed the club. Even so, the events that followed were unthinkable, not least because Argentina’s system of deciding relegation on a three-year points average was specifically designed to help the bigger clubs.

QUIZ! Can you name every team to be relegated from the Premier League?

Each Argentine season is divided into two short tournaments. River finished bottom of the pre-Christmas league in 2008 and lower-mid-table in both parts of 2009/10, while fourth and ninth place in 2010/11 were not enough to avoid a relegation play-off, where they were defeated by Belgrano 3-1 on aggregate.

Erik Lamela and Roberto Pereyra were among those to depart that summer, as the second tier beckoned for Los Millonarios.