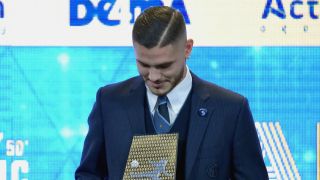 Massimiliano Allegri has hailed Inter striker Mauro Icardi as his Juventus side prepare to host the Nerazzuri in the Derby d'Italia.

Icardi was named Serie A Footballer of the Year this week, with Allegri taking home the coach's prize for a fourth time.

Inter lie 11 points behind Juve in third after 14 league matches this season and would welcome another ruthless showing from the Argentina striker to reignite their title ambitions.

The game will be a showdown of master marksmen, with Cristiano Ronaldo looking to add to his 11 goals in 18 outings in all competitions for Juventus. Icardi has the same number, but from two fewer matches.

"Inter's strong spot is that they always play the ball," Allegri told a pre-match news conference.

"Then they have Icardi, who is an extraordinary finisher.

"As far as their weak points go, we must be good to make them evident."

6 - Mauro has scored six goals in his last four Serie A appearances at the Olimpico (vs AS Roma and Lazio), after having failed to find the net in his previous seven. Takeoff. December 2, 2018

Allegri also reserved praise for his opposite number Luciano Spalletti, the ex-Zenit boss who is in his second season at San Siro, having returned Inter to the Champions League on the back of a similarly impressive stint with Roma.

"Inter continues to grow with a very good coach, with important players like Icardi, [Ivan] Perisic or [Matteo] Politano," he added.

"Congratulations to Spalletti for what he is doing, after having already done great things in Rome and in Russia."