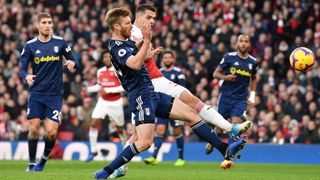 Arsenal started 2019 with a morale-boosting win following their hammering at the hands of Liverpool, recording a 4-1 triumph over struggling Fulham at Emirates Stadium.

A visit from the Premier League's 19th-placed side offered welcome respite for Unai Emery's side after their 5-1 reverse at Anfield, though they did not have it all their own way before Granit Xhaka's 25th-minute opener.

The recalled Alexandre Lacazette doubled the Gunners' lead early in the second half, though Fulham halved the deficit with a tap-in from substitute Aboubakar Kamara after 69 minutes.

However, it was an Arsenal replacement who finished off Fulham's hopes of picking up a point, Aaron Ramsey converting a rebound after Pierre-Emerick Aubameyang had hit a post, though the latter did score his 14th league goal of the campaign in the closing minutes, putting him one clear of Mohamed Salah in the scoring charts.