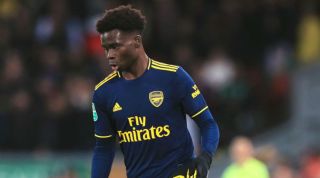 Saka is reportedly a target for Manchester United after having a very successful season so far for Arsenal.

The 18-year-old's contract is due to expire in 2021 and the Gunners are said to be extremely keen to tie him down.

By trade, Saka is a left-winger but has had to cut his teeth as a left-back due to Arsenal's injury crisis in that position.

Both Kieran Tierney and Sead Kolasinac have struggled with fitness so far this season.

However, Saka has proven himself more than useful in the role and has emerged as one of Arsenal's brightest prospects.

The teenager has scored three goals and provided nine assists in all competitions so far this season.

Saka's impressive displays have reportedly caught the eye of many clubs with Manchester United being the most notable.

Arsenal are reluctant to allow an academy product to join a rival like United and are said to be negotiating a new deal.

Mikel Arteta said the club were doing all that they could to extend Saka's contract and seemed confident they would.

"The club is doing what it has to do and is having conversations," he told media in a press conference (via the Express).

"[Hopefully] we'll get it resolved."

Arsenal's game against Manchester City has now been suspended due to health and safety precautions regarding the Coronavirus.