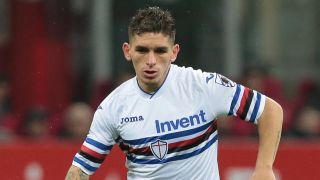 Lucas Torreira has edged closer to a reported move to Arsenal with Sampdoria president Massimo Ferrero announcing the Uruguay midfielder has left for €30million.

Torreira, who was a second-half substitute in Uruguay's World Cup Group A opener against Egypt, would become the third signing under new Arsenal head coach Unai Emery following the arrival of Stephan Lichtsteiner and Bernd Leno at Emirates Stadium.

The 22-year-old played 36 times for Sampdoria in 2017-18, scoring four goals as the club finished 10th in Serie A, and Ferrero picked him out when explaining how the club makes money by developing players.

"Torreira has left for €30million," Ferrera told Tuttomercatoweb. "I bought him from Pescara when no one believed.

"We bet and we won, paying just €3million. The money that comes in is used to keep the club going.

"Sampdoria is a stepping stone. It's a family-run club and that allows players to grow up.

"It's normal they have aspirations to play for big clubs, but I do not need to sell out."

Should the deal go through, Torreira would fill the gap in Arsenal's squad left by Jack Wilshere, who announced he would be leaving the club when his contract expires at the end of June.