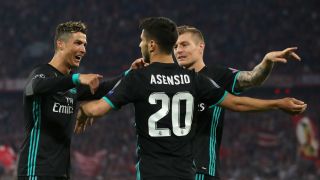 Marco Asensio cannot imagine a Real Madrid side without Cristiano Ronaldo after the Portuguese superstar hinted at leaving the Spanish capital.

After claiming his fifth Champions League title with victory over Liverpool last month, Ronaldo gave an eye-opening post-match interview that suggested his Madrid future was not assured.

"We will talk in the future. It's been really beautiful to play for Real Madrid. I'll give a response in the coming days," he told beIN SPORTS.

His comments were brushed off by team-mates Karim Benzema and Marcelo, while Ronaldo has since admitted his remarks were mistimed.

And the thought of not playing alongside Ronaldo in the future is not something Asensio wants to contemplate.

"I cannot imagine playing without him," Asensio told Marca.

"Cristiano has been, is and will be very important for us and Madrid and he must always go hand in hand."

Asensio will have to cope without idol Zinedine Zidane at the Santiago Bernabeu next season, though, after the Frenchman resigned following their European triumph in Kiev.

"The Zidane thing caught us all a little by surprise, but my experience with him has been very good," the Spain international added.

"He trusted me a lot and we have a very good relationship.

"From the beginning I have things very clear, I knew what was coming and I worked to have those opportunities.