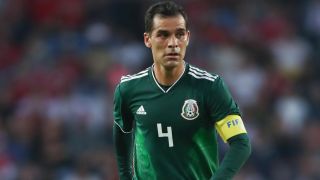 Barcelona paid tribute to Rafael Marquez after the former defender and Mexico captain ended his long and glittering career after 22 seasons.

The 39-year-old – widely considered one of Mexico's greatest ever players – announced his retirement via social media.

Marquez won four LaLiga titles and two Champions League trophies among others at Barca, where he arrived from Monaco in 2003 and spent seven years.

Marquez became just the third player to feature at five World Cups as Mexico reached the last 16 of Russia 2018.

"They have been 22 years in which I have felt very satisfied, having made many sacrifices, efforts, mistakes, wise choices and, as a result of them, having caused sadness, sometimes disappointment, but mainly joy," Marquez wrote in a message shared on Twitter.

"I want to thank all fans who have shown me their affection over the years. They are and will keep being my incentive to keep giving my best, whatever I do and wherever I am."