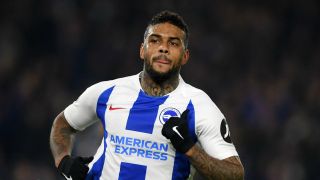 The Gunners have failed to win four of their last five league matches on the road and they were guilty of throwing away two points on Wednesday as Locadia profited from Stephan Lichtsteiner's mistake to end a 17-game goalless run.

Pierre-Emerick Aubameyang – the Premier League's top goalscorer – had put the Gunners ahead, but holding onto all three points proved a step too far for Unai Emery's stuttering side.

Arsenal have now won two of their last five league outings and could find themselves two points off the top four if Chelsea beat Watford later on Boxing Day.

Aubameyang almost opened the scoring in the fourth minute with a cute lob from Matteo Guendouzi's pass, but Mat Ryan was able to tip his effort over the bar.

There was nothing the Australia international could do three minutes later as Alexandre Lacazette shifted the ball to Aubameyang, who made no mistake in finding the top corner.

Eventually Brighton settled but Arsenal should have doubled their lead on the half hour, Aubameyang denied by a superb save from Ryan after collecting a Lucas Torreira pass on his chest.

Ryan's stop proved crucial as the hosts levelled soon after, Davy Propper launching a counter-attack following an Arsenal corner that Locadia pounced on to score – the forward helped by Lichtsteiner's inability to clear.

Propper could – and perhaps should – have given Brighton the lead in the early stages of the second half, the midfielder heading wide from Solly March's pinpoint cross.

Opportunities in the second half proved few and far between, with the March and Locadia wasting the chance to be Brighton's matchwinner in the final 15 minutes.

What does it mean? Gunners lose ground on top-four

With Manchester City dropping points again this was a chance for Arsenal to strengthen their position in the top-four battle, but they are clinging on after only coming away with a point. Brighton, meanwhile, are now 10 clear of the bottom three.

Aubameyang has been in fine form this season and has already eclipsed the 10 goals he scored last season, Wednesday's strike his 13th of the campaign. The Gabon international is a man in form with 11 goals in his last 12 league outings.

Lichtsteiner had been recalled for the trip to the south coast but he was far from the calming influence Emery would have hoped for. The Swiss defender misjudged his jump to gift Brighton their equaliser and he was lucky not to concede a penalty soon after.

- Brighton have lost just two of their last 12 Premier League home games, winning five and drawing five.
- Arsenal have conceded in each of their last nine away Premier League games, only going longer without an away shut-out in the competition in a run of 11 ending in October 2010.
- Pierre-Emerick Aubameyang has been directly involved in 30 goals in his 32 Premier League appearances for Arsenal, scoring 23 and assisting seven.
- Since Aubameyang's debut for Arsenal in February, no duo has combined for more Premier League goals than the Gabonese striker and Alexandre Lacazette (six, level with Bouremouth's Callum Wilson and Ryan Fraser and Tottenham's Harry Kane and Christian Eriksen).
- Arsenal's Alexandre Lacazette has provided an assist in three consecutive games in Europe's big five leagues for the first time ever.
- On his 28th birthday, Arsenal’s Aaron Ramsey made his 250th Premier League appearance, becoming the eighth Welshman to hit that milestone.

Arsenal face another tough trip on Saturday when they visit league leaders Liverpool, while Brighton entertain an Everton side who put five past Burnley on Boxing Day.