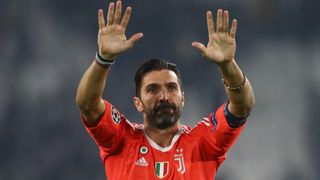 When Juventus made Gianluigi Buffon the world's most expensive goalkeeper for a reported €53.5million in 2001, high expectations certainly accompanied the promising 23-year-old.

But few, if any, would have dared to predict he would still be at the peak of his powers some 17 years later.

Yet the evergreen Italian turns 40 on Sunday and appears to have lost very little - if any - of the command, agility and leadership he has shown throughout his immense career.

It seems likely that Buffon will hang up his gloves this year, having previously stated that only winning the Champions League will be enough to convince him otherwise, meaning the most Serie A appearances he can hope to reach is 646, one short of Paolo Maldini's record.

Nevertheless, he will go down as one of the greats and may well retain his transfer record after retirement, as we examine who else would line up with him in an XI of the most expensive players ever by position.

The fact Buffon remains the most expensive goalkeeper of all time - almost 17 years after leaving Parma for Juve - highlights what a remarkable player he is. Perhaps he would have earned even more recognition had he won the Champions League, but otherwise he has enjoyed immense success throughout his career. Eight Serie A titles and the 2006 World Cup are chief among them, while his longevity and general ability should also be considered two major accomplishments. The finest goalkeeper of all time? He is certainly among them.

Acquired from Tottenham at the start of the season, it is still a little early in his Manchester City career to determine whether he will be value for money, but Walker has fitted seamlessly into Pep Guardiola's side as they march relentlessly towards what will surely be a successful campaign in the Premier League. Eyebrows were definitely raised when City paid Spurs so much for the England international, but he is going about his business in solid enough fashion, meaning questions about his pricetag have since eased off.

Although his final months at Everton were not necessarily in keeping with the rest of his spell at Goodison Park, Stones showed great promise on Merseyside and convinced City to splash out, with Guardiola said to be impressed by the centre-back's ability on the ball and his eye for a pass. His first season at the Etihad was somewhat hit-and-miss, as Stones made a number of high-profile errors, but he has enjoyed much greater consistency this term alongside Nicolas Otamendi and he looks set for a long career at the top of English football.

When Liverpool announced they had agreed a deal with Southampton for Van Dijk on December 27, they had also committed to making the Dutchman the most expensive defender of all time. The 26-year-old has regularly impressed in the Premier League since he joined Saints from Celtic in August 2015, striking a balance between physical and technical ability. His start at Anfield has been a little up-and-down, with a debut winner over Everton in the FA Cup followed by another injury and an error which ultimately allowed rock-bottom Swansea to beat Liverpool, but it is still early days.

A key cog of the swashbuckling Monaco side which claimed the Ligue 1 title and reached the Champions League semi-finals last term. Mendy's rampaging runs from the left-back spot become a staple of Leonardo Jardim's side, with his crossing ability also forcing many to take notice. It was hardly surprising they failed to keep hold of him, as City - on a major defensive recruitment drive - threw the big bucks Monaco's way and brought him to England. He made an encouraging start, looking sharp on the pitch and capturing the imagination of fans off it, with his engaging social media personality. But he suffered a serious knee injury in just his fourth Premier League game and is expected to be out until April.

France star Pogba had the honour of being the most expensive player ever for a season after returning to Manchester United in a huge deal from Juventus. It could certainly be suggested that he struggled to fully live up to his billing during his first season, but the 24-year-old has looked much more comfortable and influential this term, as evidenced by his three goals and nine assists from 14 games, comfortably beating his record of last term (five goals, four assists) already. He will surely only get better and better, while he will also be hoping to play a key role as his country aim for a first World Cup triumph since 1998 in Russia later this year.

Luis Figo may have been the first of the 'Galaticos', but Zidane was the most expensive and arguably the most influential in a Real Madrid shirt. After just a month as Buffon's team-mate at Juve, Madrid broke the world transfer record to sign the Frenchman and he went on to win the Champions League in his first season - a success made all the more memorable by his remarkable volley in the final. His sending off for headbutting Marco Materazzi in the 2006 World Cup final - his last game before retirement - was a rare blemish on otherwise brilliant career. He has taken to coaching just as well, winning the Champions League in each of his first two seasons in charge of Madrid, though time might be running out after a difficult 2017-18 so far.

The subject of a long charm offensive from Barcelona, Coutinho eventually got his way and moved to Catalonia in early January. The Brazilian had been linked with a move throughout pre-season and reportedly tried to force it through himself, resulting in Liverpool publicly stating their intent to keep him. Back came Barca around the turn of the year, however, and this time they landed their man, who will likely be their 'heir' to Andres Iniesta. It might be slightly too soon to determine whether he will relish being the club's record signing, however.

Real Madrid broke the transfer record they set with Cristiano Ronaldo when they brought Bale to the Santiago Bernabeu from Spurs in 2013. In terms of trophies, there can be no denying his success, having won 10 titles - including three Champions Leagues - since making the move to Spain. But his time in LaLiga has also been mightily frustrating. A number of injuries have disrupted the last two-and-a-half years of his career, something which has impacted the supporters' views of him, attracting jeers and whistles from them on more than one occasion. However, he does appear to be in good health at the start of 2018. Long may it continue for the talented Welshman.

Perhaps only Buffon can come close to Ronaldo in terms of value for money since his transfer from Manchester United in 2009. Aside from this term, he has only failed to get past 40 goals in all competitions for a season once - his first year - and has won four Ballons d'Or in Madrid. The records have tumbled and so have the trophies, winning everything there is to win at club level. He also captained Portugal to a Euro 2016 triumph, giving him something perennial rival Lionel Messi has not; success with his senior international side. At 32, he is starting to show signs of decline after a difficult start to the season, but few would bet against him rediscovering his best once again.

The world's most expensive player after his part in a transfer which shook football in August. Paris Saint-Germain left Barca utterly helpless as they paid Neymar's €222m release clause and secured his signature, making the Brazilian the poster boy for the club's Qatari 'revolution'. He's taken like the proverbial duck to water since joining the Ligue 1 club, scoring 15 goals in as many appearances in the competition so far. It is said that his decision to leave Barca - and the shadow of Messi - was to enhance his Ballon d'Or chances. But, if you believe certain media reports, he might just find himself back in Spain with Real Madrid as Ronaldo's 'heir' sooner rather than later.