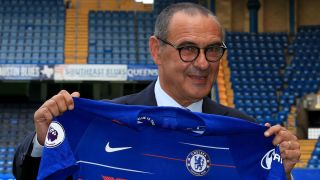 De Laurentiis replaced Sarri with Carlo Ancelotti at the end of last season, a punishment for taking too long to make his mind up about his future.

The coach remained contractually tied to Napoli even after his dismissal, before Chelsea eventually reached an agreement with the club to bring him to the Premier League, sacking Antonio Conte as a result.

Chelsea's appointment of Sarri played a major role in the signing of midfielder Jorginho, who initially looked destined to join Manchester City.

But Jorginho is not the only player Sarri tried to bring with him to Stamford Bridge, according to his former boss.

"I didn't like him saying that we both made mistakes, as I don't think I made any," De Laurentiis told Sky Sport Italia.

8521 - completed 8521 passes under in his last three Serie A campaigns, more than any other player in the Top-5 European Leagues over the same period. Couple. July 14, 2018

"He had a contract, so I could've said something because he was behaving in unacceptably, going against players he didn't think were very good.

"I was not wrong to not challenge him, even if it would've been the most obvious thing [to do].

"These players gave him a lot. He massacred them in his famous training sessions, but they always reacted well.

"After that, he wanted to take my whole team to England and dismantle it. I had to lay down the law to Marina [Granovskaia, director at Chelsea].

"He wanted Jorginho and I gave him away after talking with Ancelotti, who told me he was expecting a lot from [Amadou] Diawara and that he wants to play [Marek] Hamsik deeper."