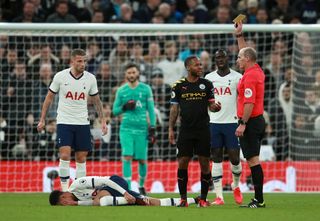 Tottenham are hopeful Dele Alli will be fit to face Southampton in their FA Cup fourth-round replay on Wednesday.

Alli limped off in the second half of Sunday’s 2-0 win over Manchester City, having earlier been subjected to a reckless tackle by Raheem Sterling, who was lucky to escape a red card.

Mourinho feared the injury could be a bad one, but it has turned out not to be serious and the England midfielder will be assessed before Wednesday night’s game.

“Dele Alli was very lucky. Did Sterling want to injure him? I don’t think so, I don’t believe that he wanted to.

“So respect to Sterling, I have no problem at all. But the intention does not count. What counts is the action. It is a red card.”

Sterling was shown a yellow by referee Mike Dean, which Mourinho feels should have been upgraded to red by VAR.

The Portuguese has become increasingly vocal about his desire to see referees being the ones to make the important decisions – not the VAR official.

“The only thing I can say is, if the referees are not allowed to go to the (pitchside) screen and take the big decisions of the game, they have to change the name of the VAR and call it VR – video referee,” Mourinho said.

Mourinho, who also saw City awarded a penalty after a VAR check, said: “Because in this moment, the referees that are on the pitch are not making the most important decisions of the game. Mike Dean decided it was not a penalty.

“The VAR decided it was a penalty and Mike didn’t have the chance to go to the screen and make that decision. Who made that decision was Kevin Friend.

“So Kevin Friend should be called VR because he made the decision – the same thing with the yellow card and the red card.

“Mr Dean on the pitch decided yellow card… which I accept by Mr Dean because he is on the pitch and it is a very difficult job.

“What I don’t accept is Mr Friend with the screen made the decision of keeping that.

“So I think one of two: Give the referee the command and give him the possibility of going to the screen for the big decisions, or change the name to ‘VR’. I don’t accept the mistakes by the video referee.”

Ben Davies has returned to full training following an ankle injury picked up in Mourinho’s first game in charge in November.

The left-back should be ready for Spurs’ next Premier League game after the winter break.

“He’s training with us since Monday. Of course, after (Wednesday) the boys are going to have some time (off) but not him, he has to stay and work.

“So when we start the week of Aston Villa he will be training with us fully, so if everything goes well he will be good for the Villa game (on February 16).”

Spurs have registered their Champions League squad for the knockout changes. With the addition of new players last month, it means Victor Wanyama has missed out.

Mourinho opted for the comfort of a third goalkeeper over the central midfielder, who has featured just once during his spell.

“I feel safer by having Michel (Vorm) on the list. I don’t want to have the risk of losing Paulo (Gazzaniga) or Hugo (Lloris) and not to have Michel on the list.

“Victor is in a position where we have lots of players – (Harry) Winks, (Eric) Dier, (Oliver) Skipp and Gedson (Fernandes).”

New signing Steven Bergwijn is ineligible for the replay, having been signed after the original tie, while Moussa Sissoko (knee) and Harry Kane (hamstring) are injured.