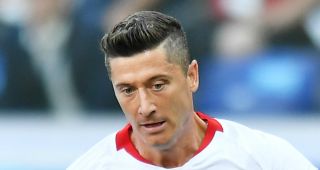 Borussia Dortmund CEO Hans-Joachim Watzke would be willing to spend €100million to bring Bayern Munich striker Robert Lewandowski back to the club, saying: "We could handle that."

Dortmund have spent a combined €53m on centre-back Abdou Diallo and midfielders Thomas Delaney and Marius Wolf ahead of the 2018-19 season but Watzke made it clear he would happily break the club's transfer record to secure the services of one of Europe's top strikers.

Lewandowski left Dortmund for Bayern in 2014 and has since scored 106 Bundesliga goals in four seasons.

Bayern president Uli Hoeness insisted the 29-year-old, who is contracted until 2021, is not for sale at any price, but Watzke would not be afraid to make a nine-figure bid for his services.

It's a great honor to be the top scorer again. Lots of thanks to my team mates, without them it would not be possible! May 12, 2018

"Robert knows the business, the league, even the club and we know he would work right away," Watzke told SportBILD.

"Only a handful of players in the world can give you this security.

"For such a player, I would be willing to pay even 100 million euros."

Dortmund's most expensive signing to date is Andre Schurrle, who joined for €30m from Wolfsburg in 2016, but Watzke made it clear the club would not be left behind by the rising cost of attracting the game's best talent.

However, having seen players such as Ousmane Dembele, Pierre-Emerick Aubameyang and Henrikh Mkhitaryan rise to prominence at Signal Iduna Park in recent years, Watzke's preference is for the club to develop its own greats.

"The players in the top segment no longer cost 50, but rather 100 million euros," he said.

"We could handle that, too, if we absolutely want to have a player and are a thousand per cent convinced.

"But to be honest, I much prefer to create such players myself. BVB has always been strongest when developing its stars."