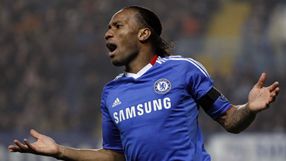 Manager Andre Villas-Boas said the Ivory Coast striker was back in contention for a place after suffering a nasty head injury in an aerial challenge with Norwich City goalkeeper John Ruddy three and a half weeks ago.

Villas-Boas also said he would adopt a new strategy by blooding youngsters like midfielders Josh McEachran and Oriol Romeu, striker Romelu Lukaku and defender Ryan Bertrand in the League Cup this season.

"It is a different approach," the Portuguese told a news conference on Tuesday. "We want to win the most amount of trophies possible but we have taken this approach to the League Cup to promote the youngsters.

"We have enough good players to try to win the trophy and we will try to give opportunities to players that have been used less [this season]."

In recent seasons Chelsea have picked their strongest side in the League Cup, winning the trophy in 2007 and 2005 to add to previous triumphs in 1998 and 1965.

Villas-Boas said the plan was to keep playing the youngsters no matter how far his team progressed in the competition this season.