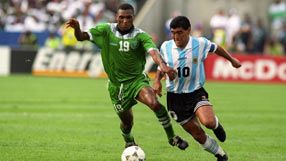 Emenalo joined Chelsea in 2007 and has been working as the club's Head Opposition Scout.

He represented Nigeria as a defender at the 1994 World Cup and played for clubs including Molenbeek in Belgium, England's Notts County and San Jose Clash in the United States.