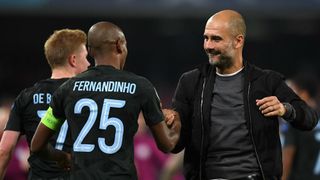 Manchester City manager Pep Guardiola believes Fernandinho ranks as one of the best three holding midfielders in the world.

Free-scoring Premier League leaders City will aim to improve their record of nine wins and a draw from 10 top-flight games when they host Arsenal on Sunday.

A 4-2 triumph at Napoli to secure qualification for the last 16 of the Champions League in midweek gave the latest demonstration of the stunning attacking array at Guardiola's disposal.

Raheem Sterling netted his 10th of the season and Sergio Aguero became City's all-time leading scorer as Leroy Sane excelled against the Serie A table-toppers.

But ahead of an encounter with Arsene Wenger's side that promises to be another feast of attacking football, Guardiola took time to praise a vital defensive cog in his side.

Sitting at the base of City's midfield, Fernandinho's superb form this term has been vital to implementing the former Barcelona and Bayern Munich boss' desired style of building from the back and allowing the creative talents of Kevin De Bruyne and David Silva to wreak havoc.

Guardiola performed with distinction in the same position for Barca during his playing days and has coached masters of the art such as Sergio Busquets and Xabi Alonso. He feels City's 32-year-old Brazil international measures up to the very best.

"I think that Fernandinho right now is one of the best - best, best, best - three holding midfielders in the world," he said.

"The same as with [defenders] John [Stones] and Nico [Otamendi], Fernandinho has achieved another level with his positivity and mentality.

"He gives us a lot – with the ball and without the ball, in terms of many things that we need to compete.

"Last season we cannot forget that Fernandinho played at full-back many, many times and made no complaints.

"He tried and asked always what he had done and how he could improve. When you have a lot of players in a squad with that mentality you can dream to win games."

What a night! An early qualification and another great team performance! Come on, guys! Come on, City! November 1, 2017

Those dreams are becoming a reality with an almost inevitable frequency for Guardiola at present, leaving the 46-year-old to temper expectations around his in-form side.

Having already batted back questions over matching Arsenal's 2003-04 'Invincibles' by going through a Premier League season unbeaten, the Catalan insisted dreaming of a Premier League, FA Cup and Champions League treble would be a "big mistake".

"Winning the treble is an exceptional situation," said Guardiola, who achieved the feat in 2008-09 with Barcelona – crowning a remarkable maiden season as a senior coach.

"Barcelona did it twice, [Manchester] United, a long time ago Celtic, Inter Milan with Jose [Mourinho] – I think it is an exceptional situation.

"I think, for English football, all five teams will go to the last 16 in the Champions League. That is the first real good step.

"That is the best news compared to the previous years for English football. After that we will see.

"There are five teams there – more chance to win the Champions League, doubles, maybe trebles.

"But I think winning trebles is an exceptional situation today, like it was before in our period in Barcelona.

"Bayern Munich won the treble with Jupp Heynckes [in 2012-13] – a top team in Europe and that is the only treble in their history, even in the era of [Franz] Beckenbauer, Uli Hoeness and [Karl-Heinz] Rummenigge.

"I think it is a big mistake to think 'we are going to win the treble'. Beat Arsenal and after that we will see."