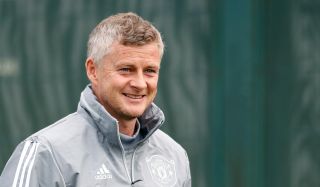 Mason Greenwood will spearhead a young Manchester United side in Thursday’s Europa League opener against Astana, with Ole Gunnar Solskjaer calling the 17-year-old one of the best finishers he has ever seen.

After two years back at European football’s top table, the Old Trafford giants are preparing to kick-off a gruelling Europa League campaign at home to the perennial Kazakhstan champions.

United lifted the trophy when they last played in the competition in 2016-17, when manager Jose Mourinho’s side bulldozed their way through to the final with an experienced squad.

The inclusion of Greenwood is most eye-catching, having been confirmed as a starter after four substitute appearances this season.

“He is still very young, Mason, but he’s maturing,” Manchester United manager Solskjaer said. “He’s developed so much in the last six months since I came in.

“I remember the kid who just wanted to play with mates in the Under-18s. And now he’s knocking on a door, he’s ready to play these games.

“For me, he has been in the Under-21s with England, he’s tasting it more and more. And his appetite for football must be growing.

“I just don’t want to put too much pressure on him, apart from go out there and enjoy yourself.

“Work hard, close down because when the ball lands in your feet I know you’re going to score anyway. I know you’ll make the right finish. Keeper might make a fantastic save but he’s one of the best finishers I’ve seen.

“It’s just that enjoyment, express yourself, go out at Old Trafford because there’ll be 11 Astana players living the dream tomorrow.

“It must be one of the biggest games of their careers for some of these players, but I want it to be a memorable one for our players as well and Mason is one of them.”

Solskjaer intends to change tack as his side embark on their Europa League journey as the manager focuses on the youth at his disposal.

“It’s a process and for these, we trust them,” the United boss said.

“It’s for them to grow as players but also human beings – that responsibility of being robust enough to go out at Old Trafford.

“It’s not just about enjoying yourself because you’ve got to get results.

“And if you don’t throw them in you don’t know what you’ve got so, for me, I don’t see this as any other way of doing this because I’ve always done this wherever I’ve been.

“I’ve not been too many places but that’s my belief as a coach that you have to give them a chance, an opportunity.

“Especially forward players. They’ll win you games. Defenders it’s a shift, find a way to win a game and keep them out.”

Solskjaer confirmed academy graduate Axel Tuanzebe, 21, will be in the line-up against Astana, 28 months since last starting a match for United at Old Trafford.

A knock sees Daniel James join Paul Pogba, Anthony Martial and Luke Shaw on the sidelines, with Fred coming into midfield and back-up goalkeeper Sergio Romero getting the nod ahead of David De Gea.