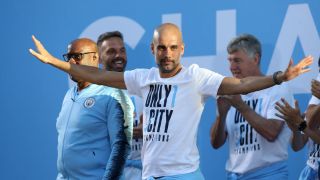 Pep Guardiola would rather retain the Premier League with Manchester City than win the club's maiden Champions League title next season.

City stormed to glory in England's top flight this term, finishing 19 points ahead of rivals Manchester United in the final standings after Gabriel Jesus' last-gasp winner at Southampton took them to 100 points.

Guardiola's men are the first team to reach that landmark and also tore up a succession of other competition records on the way to a third Premier League crown in seven seasons.

That level of regular success is something City have been unable to take on to the European stage, reaching the Champions League semi-finals just once in seven attempts and bowing out to finalists Liverpool in the quarter-finals this time around.

During his time as Barcelona boss, Guardiola won Europe's top prize twice, but he told Sky Sports he would sooner lift the Premier League again with City.

"Premier League. No doubt," he said.

"It will be a huge mistake to think, 'Okay now we have the Premier League, we are now going to go for the Champions League instead.' Big mistake.

"It gives you the consistency to arrive at the right moment, the Champions League is so complicated the opponents are so good, all of them.

"It would be a big mistake for Manchester City to be focusing on [the Champions League]; of course it will be a target, of course we will fight.

"That competition, you play at Anfield, Barcelona, Real Madrid, Roma, Bayern, United, Juventus, all of the big clubs.

"Of course we are going to try it, but I don't think if we don't win the Champions League in the next five years it will be a disaster. I don't think so."

Congratulations to all winners and nominees at the 26th LMA Annual Awards Dinner, including Pep Guardiola - LMA Manager of the Year 2017/18, sponsored by Everest 15 May 2018

Manchester United great Gary Neville acknowledges Guardiola – named the League Managers Association (LMA) Manager of the Year on Tuesday – has the upper hand in his long-standing rivalry with Jose Mourinho on the other side of town.

However, the ex-England right-back thinks Mourinho could redress the balance if he manages to lead FA Cup finalists United to domestic glory next season.

"These two managers have been at Real Madrid and Barcelona and both won leagues there," he told The Daily Mail. "Ultimately, at the end of next season if Pep wins another league that will be a big problem over a three-year period.

"But if Jose was to win the league next year you could actually argue Jose has done the better job. Next season will be critical."