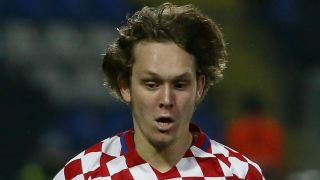 Alen Halilovic has completed a medical ahead of his proposed move from Barcelona to Hamburg.

Croatia international Halilovic spent last season on loan at Sporting Gijon and was not present as the Barcelona squad returned for pre-season training this week.

Hamburg revealed on Thursday that Haliliovic had completed his medical, posting a picture of the 20-year-old in the club's training kit on Twitter.

Halilovic joined Barca from Dinamo Zagreb in 2014, but failed to make a single LaLiga appearance for the Catalan giants.

Last season's stint at Gijon saw Halilovic make 35 league outings, scoring three goals, and he will be keen to kick on in the Bundesliga.

Reports suggest a fee in the region of €5million will be paid, with Barca retaining the right to re-sign the attacking midfielder in the next two years.