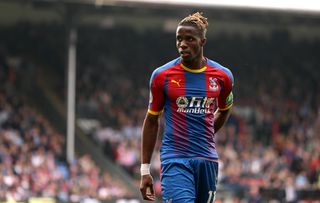 Wilfried Zaha has admitted he wants to leave Crystal Palace in search of Champions League football.

But now the Ivory Coast forward has put a host of interested clubs on notice by targeting top-level European football as one of his chief career aims.

“I have to experience the Champions League. I just need the opportunity, that’s it, and I’ll do the rest,” Zaha told the Daily Mail.

“It gives me goosebumps seeing the crowds, amazing stadiums.

“When I’m seeing players I think, ‘What would I do in that predicament?’

“I feel I can get to that stage, with the confidence I have and belief in my ability. I should be there. I’m missing out. I don’t just want to be at home watching it.

“Real players, when the time comes, it’s that big stage, they’re the ones that step up. I want to be that player in the big game.”

Zaha left home club Palace for Manchester United in a £10million deal in 2013, only to return to Selhurst Park two years later.

The forward has won a Premier League-high six penalties this term, while also netting eight goals for the Eagles.

And he feels he can only realise his full career goals by leaving his boyhood club.

“I want to be competing at the highest level where there’s an opportunity to win trophies – that’s where I picture myself,” said Zaha.

“For me to be better, to achieve what I know I am capable of, I have to aim to play at the very highest level, to win trophies,’ he said.

“I’m blessed to have come this far in my playing career and I have so many people to thank for that. But I feel like there is so much more I have to offer.”

Palace head to Arsenal on Sunday having won three of their last four matches on the road.

However, they face a Gunners side who have won their last 10 games on their own turf.

Manager Roy Hodgson said: “Arsenal, like Manchester City last week, present a very difficult problem for you in the sense they are a very good team and in excellent form.

“We can happy with three wins in four away, but it doesn’t lead me to believe it will be any easier to play Arsenal, especially with the form they are in.

“We have to make certain we go there knowing that we have it in us to get the victory but also knowing how much of an effort, a struggle, and how much fight we will need.”