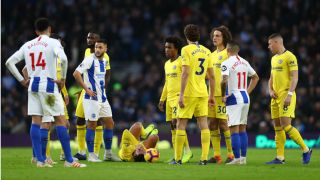 Maurizio Sarri has played down concerns over an injury Eden Hazard sustained in Chelsea's 2-1 win over Brighton and Hove Albion.

Hazard scored and set up another in Sunday's Premier League encounter but was forced off late on following a heavy challenge by Dale Stephens.

But Sarri has confirmed that the change was precautionary, which will come as a boost for Chelsea ahead of a hectic festive schedule.

"I spoke with the doctor and it's not a big problem. Maybe one day to rest, two days at most."

Like in Chelsea's previous Premier League outing, Hazard was deployed in a central role by Sarri and made an early impact by teeing up Pedro's opener.

Hazard got in on the action himself shortly after the half-hour, racing clear of Brighton's defence before coolly slotting home, but Sarri stressed that the Belgian can still improve.

"I think that, for us, he could be very important in this position," Sarri added.

"Now I think that, in that position, he has to improve in attacking the box."

Chelsea squandered a gilt-edged chance to add to their lead early in the second half, with Marcos Alonso hitting the woodwork before Solly March's effort gave Brighton hope.

And Sarri believes that Chelsea are at their most vulnerable when overconfident.

"I think we could have won better because we played very well for 60 minutes," Sarri said.

"We conceded a goal in a moment in which we were in full control of the match. We could have won really very better.

"I think that when we have the feeling of being in full control of the match, we are dangerous for ourselves.

"Suddenly the level of application and attention is lowered. The feeling when we are in confidence, when we are sure of being in control of the match, is dangerous for us."