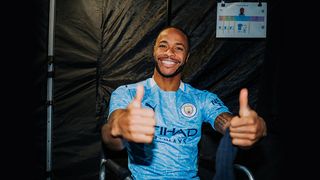 Manchester City don't just like to win, they like to win in style, and Pep Guardiola's side will be fighting to reclaim their status as Premier League big dogs looking fresher than ever next season. PUMA has revealed the 2020/21 Manchester City home shirt, which is available to order right away.

According to the official press release, the jersey’s pattern is "inspired by the iconic mosaics located in the creative hub of Manchester’s Northern Quarter and pays homage to a city brimming with football and creativity."

Mark Kennedy, the artist behind the mosaics of Manchester’s Northern Quarter said, “When I began my journey as an artist, the Northern Quarter was a derelict area that I looked at and wanted to build up. I began creating Manchester icons using ceramic plates and tiles, integrating my own artistic style. My family and I have always been huge City fans, so I created artwork of the players too. Over time I was commissioned to create artwork for the club and the city of Manchester, so I feel very privileged to see PUMA use my art as inspiration for the new City Home jersey.”

Manchester City will wear their new kit for the first time against Arsenal in the semi-final of the FA Cup on Saturday, July 18.