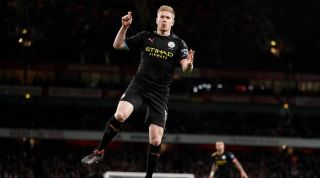 Redknapp, who made 237 appearances for Liverpool, claims that De Bruyne is ahead of his league-leading counterparts.

Liverpool's unbeaten run sees them sitting 22 points clear at the summit of the Premier League.

Their most influential players, such as Jordan Henderson, Sadio Mane and Virgil van Dijk, are being heavily tipped as favourites for the 2019-20 POTY.

But Redknapp believes that despite their impact on the Reds' success this season, Manchester City's De Bruyne has been the best player.

The former Liverpool and Tottenham Hotspur midfielder was full of praise for the Belgian playmaker on Sky Sports on Wednesday night.

"When he's on the pitch he's head and shoulders above anyone else. I didn't think [David] Silva could be beaten but KDB is taking it to the next level.

"It was like he had a force field around him – no one was allowed to tackle him. His passes are always so inviting, cutting open defences."

"It was also what he did without the ball – his all-round game right now is on another level. He's not in the team of the year but for me he's the player of the year.

"The contenders VVD – amazing season, Henderson – big fan, even Mane – but look at KDB's numbers – 20 assists - miles ahead of those around him. He is the best player in the country right now by a mile."

Former Manchester City defender Micah Richards responded to Redknapp's claims by saying that he believes POTY has to be won by a Liverpool player.

He added: "It will go to a Liverpool player – I said Henderson was world class at the start of the year, I got abuse on Twitter and now he's second in the running.

"For me a Liverpool player has to win it but there's no one else at KDB's standard."