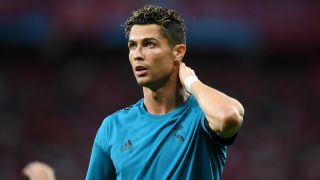 Juventus have revealed they are "evaluating several opportunities" in the transfer market amid widespread rumours of an impending deal for Cristiano Ronaldo.

The Serie A champions released a vague statement on Friday in response to a flurry of reports linking them with the 33-year-old Real Madrid star.

Speculation suggesting Juve are on the verge of signing Ronaldo prompted a surge in the club's share price, which has reached its highest point since mid-February.

As a result, the Bianconeri were compelled by the National Commission for Companies and the Stock Exchange (CONSOB) to provide an update regarding their transfer activity.

"After the request from CONSOB related to the news published recently on media outlets, Juventus Football Club S.p.A is keen to remind that during the transfer season the club is evaluating several opportunities and will publish adequate information as prescribed by the law," the statement read.

Earlier this week, Ronaldo's agent Jorge Mendes said the Portugal captain would only end his nine-year stay at Madrid for a "new stage and a new challenge".

He has won a joint-record five Ballons d'Or and scored four goals at the World Cup in Russia, including a hat-trick in the 3-3 group-stage draw with Spain.