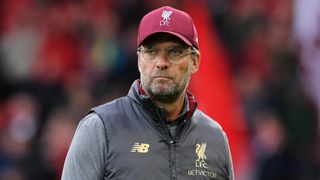 Jurgen Klopp is ready for the toughest Merseyside derby of his Liverpool tenure as they prepare to host in-form Everton at Anfield on Sunday.

The home side will hope to bounce back from a midweek defeat to Paris Saint-Germain in the Champions League, with the 2-1 reverse on French soil dropping them out of the qualification places in a tightly contested Group C.

Yet Liverpool's players must quickly forget about Europe and switch their focus to Everton, who have picked up 16 points in their last seven Premier League outings to rise up to sixth in the table.

Klopp insists the loss to PSG has no bearing ahead of such a "special game" against opponents who have improved in the 2018-19 season under the stewardship of Marco Silva.

"I don't understand why we needed a defeat in Paris to be fully motivated for the Everton game," Klopp told the media.

"It's a special game. Since I've been here, it always felt different, always was different during the preparation. The only bad thing is that we never have enough time to really prepare for it.

"You have a big game, then a few days later you play the next one. In an ideal world, we would have a week to prepare for it. All the rest is exactly like it should be.

"The games were always difficult in the past few years, but the improvement of Everton is obvious. It's a completely different team, a different style."

"Everybody knows about these derbies - players want to be part of it before they join the club, so that’s what we want to use, and of course, the crowd and Anfield as well." November 30, 2018

While Klopp has plenty of derby experience since moving to Merseyside, it will be the first taste of the occasion for opposite number Silva.

The Liverpool boss believes the current Everton squad poses the biggest threat to their neighbours and feels they would have no trouble competing at the top end in any other league in Europe.

"Since I've been here, Everton has always been really busy, but this is the best-tuned squad, 100 per cent," the former Borussia Dortmund manager said.

"Everything is there, creativity, speed, good organisation. [Seamus] Coleman is back and fit, [Micheal] Keane settled and fit - and a brilliant player for their build-up -  then Digne is like the young [Leighton] Baines, if you want. They have a really good team, then England's number one in goal [in Jordan Pickford].

"That is a proper squad, and it would be in all leagues in Europe. I'm 100 per cent sure they would be a European team in whichever competition. In England it's quite difficult, yet their development and improvement is obvious."