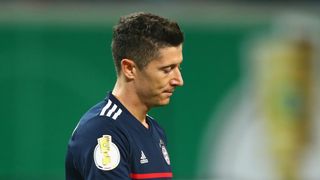 The Poland international missed Bayern's 2-1 win at Celtic on Tuesday due to a minor muscle problem, as Heynckes' men qualified for the last 16 of the Champions League.

Lewandowski, who has scored 10 goals in 10 Bundesliga appearances this season, has complained Bayern have no backup options if he needs a rest, with Kingsley Coman filling in up front at Parkhead.

But Heynckes says the prolific 29-year-old will be back in his team as league leaders Bayern prepare to face an out-of-form second-placed Dortmund at Signal Iduna Park in the first league Der Klassiker of the campaign.

"It's not my ideal choice to replace someone in attack with a midfielder," Heynckes told reporters after the Celtic win.

"I thought the team did well with this. Lewy trained well today and seems fit.

"All being well, he'll play at the weekend."

Jupp : "We had good foundations tonight and we played well tactically. The boys got stuck in." October 31, 2017