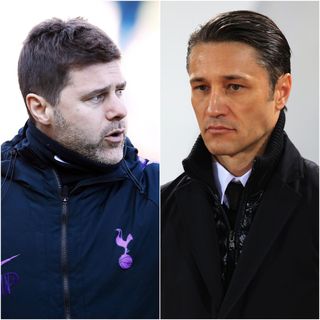 Tottenham face European giants Bayern Munich in Group B of the Champions League on Tuesday.

Here, the PA news agency takes a closer look at the German side.

FC Bayern and @Arsenal are lined up and listening to the sound of the Champions League anthem #FCBAFC#packmaspic.twitter.com/ZwlE8MZGl3— FC Bayern München (@FCBayern) March 13, 2013

Bayern have generally enjoyed their visits to London, and specifically north London, in recent years. The Bundesliga side were paired with Arsenal for four seasons out of five between 2013 and 2017 and knocked the Gunners out three times – with the fourth set of games taking place in the group stage. They recorded 2-0, 3-1 and 5-1 wins at the Emirates, while they also won their fifth Champions League title across town at Wembley in 2013.

That success at Wembley in the all-German affair with Borussia Dortmund cemented their position as a European heavyweight. Only Real Madrid, Liverpool and AC Milan have won the European Cup more than their five times, while they can also add a UEFA Cup, UEFA Cup Winners’ Cup, UEFA Super Cup and FIFA Club World Cup to their impressive haul of trophies. With 29 Bundesliga titles to boot, Bayern really are one of the continent’s most dominant sides.

It will be a case of what might have been for Spurs on Tuesday as Philippe Coutinho is likely to line up against them for Bayern. Tottenham were fleeting suitors of the Brazil international during the summer transfer window but the former Liverpool man did not want to play for another Premier League club. Coutinho is leading a new era at Bayern, following the departures of Arjen Robben, Franck Ribery and Mats Hummels. Coutinho was joined by Ivan Perisic (flu) and Lucas Hernandez (knee) in joining the German side this summer and they have both been passed fit for the game.

There was one point last season where Bayern had to come out and give their head coach Niko Kovac a vote of confidence after he endured a tricky start to his spell as Jupp Heynckes’ successor. They trailed runaway leaders Borussia Dortmund by some margin, but the board’s decision to stick with the Croatian, who had represented the club as a player for two years from 2001, proved to be a good one. They reeled Dortmund back in to claim a 29th Bundesliga title and then added a DFB-Pokal Cup to claim a double, with Kovac becoming the first man to do so as a player and manager in Germany.

Spurs know all about their German opponents after they met in the pre-season Audi Cup tournament, which they won on penalties after a 2-2 draw. But this will be just their fifth competitive meeting and first in 36 years. Tottenham progressed past Bayern in the third round of the UEFA Cup in 1983, a 2-0 home win enough to send them through 2-1 on aggregate. The German side were winners in the previous season, though, with a 4-1 home win doing the job in the Cup Winners’ Cup.