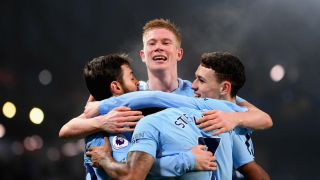 Manchester City have rewarded Kevin De Bruyne for his sensational form by handing him a new five-year contract, the club have announced.

De Bruyne's previous deal was not due to expire until 2021, but his increasing importance to Pep Guardiola's side has encouraged City to offer him fresh terms.

The Belgium international signed from Wolfsburg in August 2015 for a reported £55million and has since established himself as one of the most important figures at the Etihad Stadium.

De Bruyne led the Premier League with 18 assists last season, a number he could well replicate this term having managed 10 in 24 top-flight matches.

GET EXCITED! has today signed a new contract at the Club!INFO January 22, 2018

With the former Chelsea playmaker tied down, City are reportedly keen to arrange new agreements with Gabriel Jesus, Leroy Sane and Ederson.

"He has shown this season how important he is to the team and has been integral in everything we've done so far.

"We are thrilled he has committed his long-term future to Manchester City."