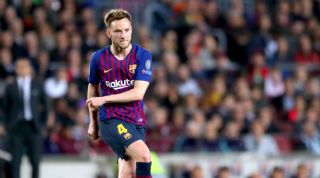 It's understood Manchester United are keen to add another midfielder following the capture of Sporting Lisbon's Bruno Fernandes.

However, the search is likely to extend into the summer as the transfer window nears closing time.

Ole Gunnar Solskjaer feels his central options are thin on the ground following injuries to Paul Pogba and Scott McTominay.

Pogba's future at Old Trafford is also shrouded in doubt and if he leaves the club come summer, Ed Woodward et al will be hunting for a replacement.

Barcelona's Ivan Rakitic has been identified as a possible solution and United have made initial contact, according to ESPN.

With the purchase of Frenkie De Jong from Ajax last summer, and the continued preference of Arthur, Rakitic's chances in Barca's midfield are dwindling.

There are now a host of midfielders in the Barcelona squad and it's thought the Croatian is struggling to compete.

The midfielder has made 15 appearances in the league this season, mainly as a substitute.

Despite Rakitic's plight, it's believed that he would prefer to stay in Spain, where his family are settled.

The 31-year-old signed from Sevilla in 2014 for a fee in the region of £16m and he was at the Andalucian club three years previous.

It's reported that United would have to pay £20m to secure the services of Rakitic, whose current deal ends in 2021.

But the Red Devils are currently thought to be prioritising the signing of a striker to compensate for the loss of Marcus Rashford.

Rashford suffered a double stress fracture of the lower back following a run of fine form for his boyhood club.