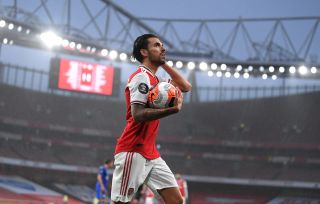 Arsenal have announced Dani Ceballos has rejoined the club on a season-long loan from Real Madrid.

The Spain midfielder scored two goals in 36 appearances for the Gunners last campaign, helping Mikel Arteta’s side win the FA Cup having joined on a temporary deal in July 2019.

He impressed enough for Arteta to want him to return to the Emirates Stadium and, with plenty of competition for places at Real, Ceballos has once again opted to spend the season back in north London.

Arteta said: “Dani was an integral part of our team last season and finished the season in excellent form.

“I love Dani’s passion and commitment and he’s a highly skilful player. We’re all delighted to welcome him back and we look forward to seeing him pick up where he left off.

Despite reported late interest from former club Real Betis it always seemed likely Ceballos, 24, would plump for another spell in the Premier League.

He posted on social media his support for Arsenal during their penalty shootout win over Liverpool in last week’s Community Shield.

Ceballos will not be available for the season opener away to newly-promoted Fulham as he will be required to quarantine for 14 days as per the UK’s coronavirus rules.

The loan signing of Ceballos follows the earlier free transfer of Willian from Chelsea and the arrival of defender Gabriel Magalhaes from Lille.