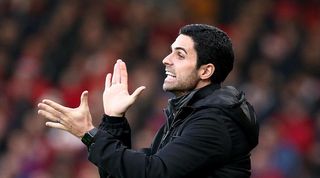 Mikel Arteta believes Arsenal have all the necessary tools to be a major force in English football once more.

The Gunners have not won the Premier League title since 2004 and currently occupy 11th place in the table.

They have emerged victorious from only one of Arteta's seven league games in charge, with five of those matches ending in a draw.

However, the Spaniard remains optimistic about leading Arsenal back towards the top of the division.

"I am convinced that we are going to do some great things together," Arteta told Sky Sports.

"We have every element that we need to be successful and take the club forward - and to do it in the way we want as well. It's great to feel that the players are enjoying it, and that they believe in what we are trying to do.

"Now it's down to us to accelerate the process as much as possible, without killing the process but by winning as many games as we can.

"There have been a lot of positives. I have tried to convince the players that if we work on certain things in training, they will happen in games and we will score goals from them.

"There have been some really good moments like that with things I have asked them to do.

"As well, some of the counter-pressing we have done has been very good. Some of the behaviours of the players weren't there before, particularly the top players tracking back.

"The distances between us and how compact we are is much better, and so is our body language during games.

"The first thing was to make those changes in terms of our culture, how we live together, some of the behaviours that I expect from players and staff and some of the values that we have to have at this club.

"I think we changed the energy at this club. I think we brought the team and the fans together, which wasn't an easy thing to do.

"And then, on the playing side, I think we are starting to see some signs of how I want the team to play, how I want it to behave, and the type of passion and commitment that the players have to show under me."

Arsenal will climb into the top half of the table with victory over Newcastle on Sunday.