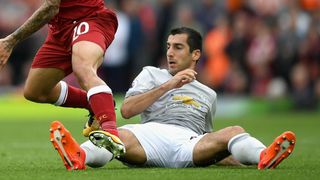 Henrikh Mkhitaryan has been left out of the Manchester United squad to face Stoke City amid speculation he could move to Arsenal as part of a deal to bring Alexis Sanchez to Old Trafford.

United are understood to have stolen a march on rivals City in their pursuit of Sanchez owing to a greater willingness to meet the demands of Arsenal and the Chile forward's agent Fernando Felicevich.

Arsenal are reportedly keen on attracting former Borussia Dortmund playmaker Mkhitaryan to Emirates Stadium as part of any agreement, with the Armenia international having come in for criticism from manager Jose Mourinho this season.

Mourinho told a pre-match news conference that Mkhitaryan would "probably" retain his place from the XI that beat Derby County 2-0 in the third round of the FA Cup, but revealed to Sky Sports his omission was down to "doubts" about the 28-year-old's future.

"I would lie if I said it was a pure tactical decision," he said. "It was just a choice of the players that we know, in this moment, they have 100 per cent their heads in Manchester United.

"No doubts about the future. I don't think it's easy for a player to play when there are doubts about his future.

"It's added pressure that a player doesn't need, so I think it's the best for him and for us, while the doubt is in the air, to protect him."

Stoke were humbled in Mark Hughes' final game in charge at League Two Coventry City and, before handing over the reins to newly appointed boss Paul Lambert, caretaker boss Eddie Niedzwiecki has made seven changes from that team – including a first Premier League start since April 2015 for former Manchester City midfielder Stephen Ireland.