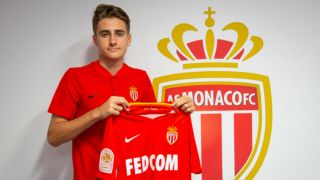 Monaco have announced the signing of Barcelona teenager Robert Navarro as the Ligue 1 club continue to focus on young talent.

The 16-year-old attacking midfielder, who has played for Spain at youth level, is described by Monaco as "a great hope of his generation".

Navarro follows Monaco's signing of Willem Geubbels, a France Under-17 international who joined in a €20million deal from Lyon last month.

"Monaco are a great club that relies heavily on its training and gives young people the chance to express themselves at the highest level," Navarro said.

"My goal is to work hard to move forward and take new steps."

Monaco have also signed Troyes winger Samuel Grandsir on a five-year deal in preparation for the 2018-19 season, although Thomas Lemar has joined Atletico Madrid and Fabinho was sold to Liverpool.