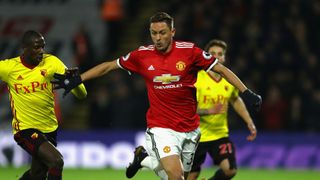 Jose Mourinho has concerns the injury sustained by Nemanja Matic in Manchester United's 4-2 victory over Watford could be "important".

Matic hobbled off in the 54th minute and was replaced by Ander Herrera, with United going on to see their three-goal lead cut to just one with six minutes remaining.

Jesse Lingard secured the victory for the Red Devils with a fine individual effort, but Mourinho felt the loss of the Serbian midfielder was key as his team struggled late on at Vicarage Road.

While the Portuguese could not clarify the extent of Matic's issue, he suggested it must be significant if the player requested his own withdrawal.

"For Matic to tell me he wants to be replaced, he does not do that if it is nothing important. It is muscular," Mourinho said in quotes reported by the BBC.

"We lost stability when Nemanja Matic had to come out but the important thing is the three points. I saw happiness from the team and played with a free mind."

"What we need to do is go back to our defensive stability, which we lost when Matic had to come out. But the important thing is the three points" - Jose Mourinho November 28, 2017

Anthony Martial added to Ashley Young's brilliant first-half double against his former club, before Troy Deeney's penalty and a goal from Abdoulaye Doucoure set up the tense finale.

In the same month he made his first England appearance in over four years, Young ended a 560-day wait for a United goal with his first against Watford.

The wing-back's second was an exquisite free-kick, and Mourinho was surprised he was not kept away from the set-piece from one team-mate in particular.

"Ashley Young trains at free-kicks and his conversion rate in training is good, so it was good he had the confidence to try it, after scoring the first goal," said Mourinho.

"I was surprised that Paul Pogba gave him permission.

"At his age, Young's playing better than ever and I couldn't be more happy with him.

"Last season I learned what Ashley Young can be, he gives stability in his performances and this season he is playing more regularly. He has the spirit and experience we need, today he also had the talent to score two beautiful goals."

"Getting on the scoresheet in the way I did was a nice homecoming!"Hear from tonight's star man after his double helps to victory at Watford. November 28, 2017