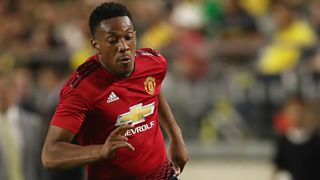 Jose Mourinho believes Anthony Martial should have returned to Manchester United following the birth of his son, while the frustrated manager announced Nemanja Matic will miss the start of the season after undergoing surgery.

Disgruntled forward Martial left United's pre-season tour of the United States to attend the birth of his second child in Paris, where he has remained since the arrival of his son.

Martial has been strongly linked with a move away from United after his agent claimed the 22-year-old Frenchman wanted to leave for more opportunities.

Speaking after United's 4-1 loss to Liverpool at the International Champions Cup on Saturday, Mourinho told MUTV: "He has the baby and after the baby is born - beautiful baby, full of health, thank god.

"He should be here and he is not here. Now we have Real Madrid and after that we have Bayern Munich and that is our start.

"I just hope the boys on deserved holidays, they take care of themselves a little bit and somebody wants to do what [Marcus] Rashford and [Phil] Jones do, which is to be back a little bit earlier to try and help the team because for the beginning of the season we are going to be in trouble."

United are set to be without a host of their stars for the club's Premier League opener against Leicester City on August 10.

The World Cup has hampered United's preparations and Mourinho – who has been visibly downbeat amid the club's struggles to deliver new signings – has now lost key midfielder Matic through injury.

Antonio Valencia will also miss the start of the season after picking up an injury in the goalless draw with San Jose Earthquakes and Mourinho added: "I think too much holiday for him. "His condition was not good when he was back, then injury."

Mourinho, whose side were level with Liverpool at half-time before the Reds scored three unanswered goals, continued: "This is not a step for anything, the majority of the payers which played are not going to play some of them are not even going to belong to the squad.

"Accumulation of matches that is killing progressively my brave boys. The ones which are always there and ready to put everything for the club, it is not a step for anything.

"Maybe it is a step for me to know the players more than anything. I know the one who are ready for anything, and I know the ones who are not ready."