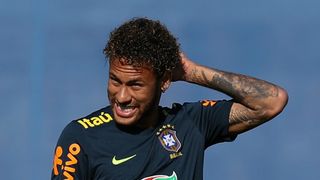 Neymar is the closest heir to Cristiano Ronaldo and is good enough to play for Real Madrid, says the club's former sporting director Jorge Valdano.

The Brazil star has been linked with a controversial switch to Madrid since leaving rivals Barcelona for Paris Saint-Germain in a record-breaking €222million deal last August.

Ronaldo's own Madrid future is in doubt after the Portugal international suggested after the Champions League final that he could leave the club, although he later indicated on a trophy parade he would stay.

And Valdano, who played for Madrid and coached the team during the 1990s, feels Neymar could be the ideal replacement for 33-year-old Ronaldo.

"I must say that Neymar is at the level of Real Madrid," Valdano told L'Equipe.

"For me, he is the closest heir to Cristiano Ronaldo.

"It seems to me a legitimate aspiration to bet on a player of his talent that will reach its fullness in the next five years."

Although PSG could lose Neymar after one year, Valdano believes the move was still worthwhile for the club, who won a domestic treble despite the Brazilian missing the end of the season with a fractured foot.

"It has been a great success for PSG to manage to recruit Neymar," Valdano added.

"That gave the Parisian club another dimension in the world of football."

Neymar is preparing for the World Cup, with Brazil opening their campaign in Russia against Switzerland on Sunday.